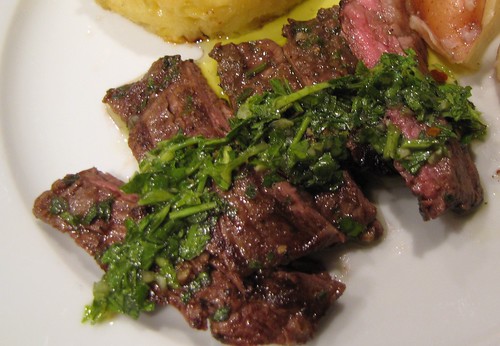 Here’s one for the carnivores! Grilled Skirt Steak with Chimichurri Sauce.

This recipe happened because I was a mean, mean wife and wouldn’t let Jim buy a bottle of Chimichurri Sauce at the store last week.

“Blech!” I announced. “Why would you want to buy that?”

“It’s fun. I like it…” the poor husband replied.

“But it’s supposed to be GREEN! That’s not even close to green.” And so it went until I assured him that we could easily and simply make our own SUPER GREEN & super tasty Chimichurri sauce at home.

I may be bossy at the store, but I think I made up for it with this dinner a few nights later.

Chimichurri Sauce and Skirt Steak have both become popular lately due to the Argentinian Steak House restaurant craze happening right now. One batch of this vibrant and potent green sauce will serve as both the marinade and the condiment for our grilled steak. 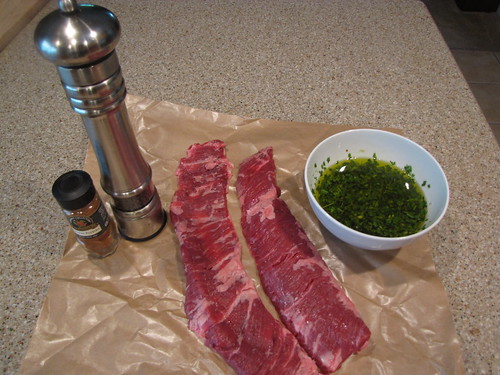 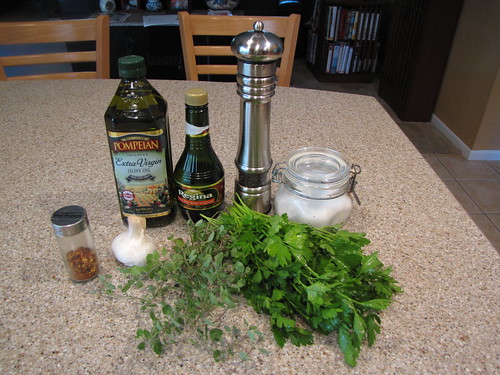 Skirt Steak, Smoked Paprika,  and Pepper for the meat.

Note:  For the best flavor, I like to marinate my skirt steak for a couple of hours. Plan ahead.

Hello raw garlic! Like Pesto, this is best eaten with someone you love. You can dial the garlic back but it’s so good…

Place 2-4 cloves of garlic in the bowl of a food processor. I used 4 and it was some serious garlic but once again, so good… 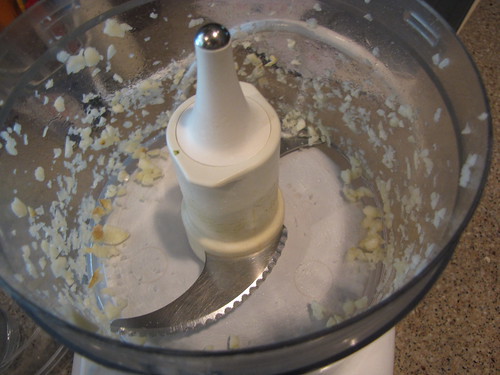 Give the garlic a whirl to chop it up. I like to pre-chop the garlic because once I add the green stuff, I don’t want to over process it.

Add 1 cup of fresh parsley leaves to the processor.

You’ll see that I have some stems in there and next time I will avoid those. Unlike pesto, I don’t like to grind this into a smooth paste so unfortunately the leaves get chopped before the stems. 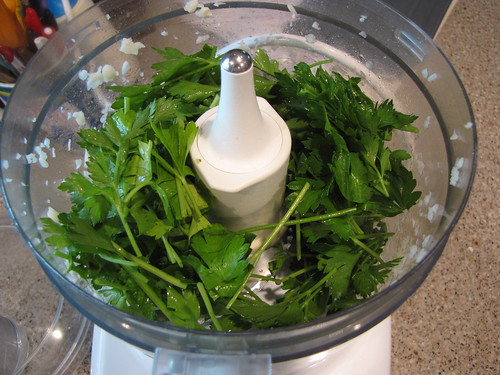 Remove the leaves from a few stems of fresh oregano until you have about 2 Tablespoons. Add the oregano to the parsley. 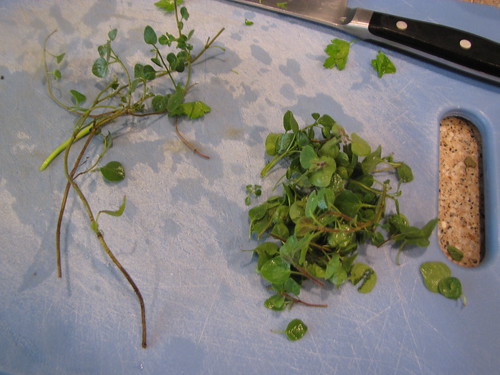 Add ½-1 teaspoons of red pepper flakes – use more if you like things spicy. Add salt & pepper to taste. 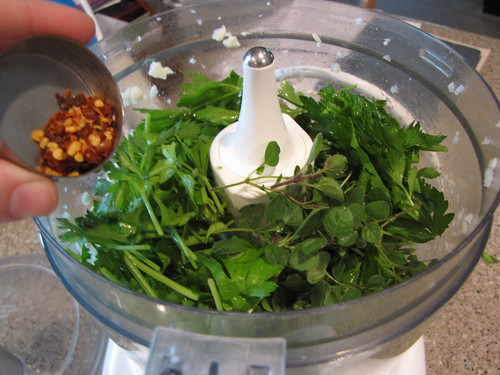 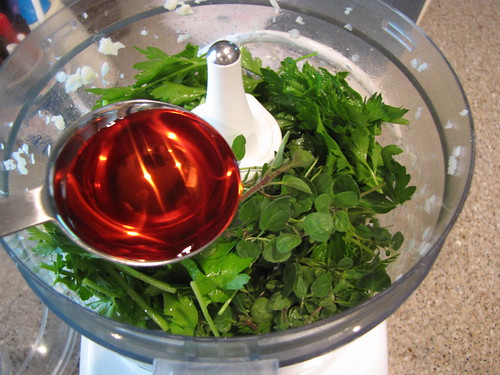 Grind this up slowly or use the pulse function so that you chop it fairly coarsely.

I like to be able to still see little bits of the parsley leaves and garlic rather than a mash like pesto.

Also, unlike pesto, we are going to add the oil by hand.

Once it is coarsely chopped, transfer your parsley mixture to a small bowl. Drizzle in about 3/4 cup of good olive oil. 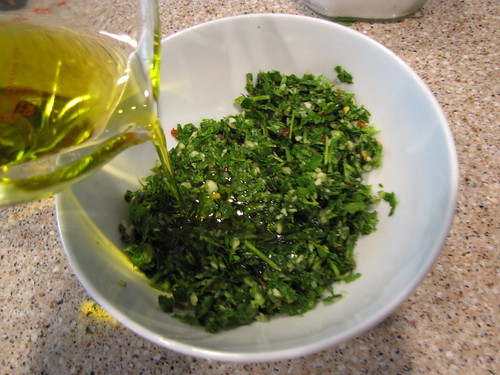 We want this to be soupy and oily like a vinaigrette salad dressing rather than emulsified so just stir the oil in with a spoon. 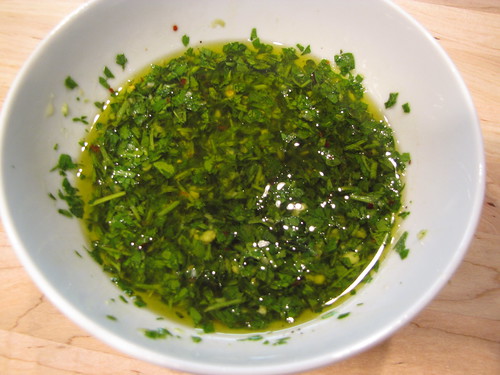 Skirt Steaks are long, marbled pieces of meat known more for flavor than for tenderness. Because of that, you want to cook them quickly and more on the rare side of things.

If you can’t deal with rare meat, I would say that you’d be better off choosing a different steak for your chimichurri (something like a ribeye or strip) rather than going beyond medium. Medium rare is what I aim for with skirt as well as flank steak.

For extra flavor, I like to rub the steak with some freshly ground pepper and a little smoked paprika on both sides. 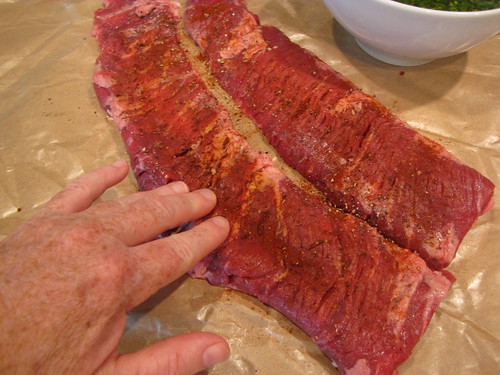 I have about 1½ pounds of meat and that was enough for 2 generous dinner portions and 1 leftover.

Place the seasoned meat in a ziplock bag and pour HALF of the chimichurri sauce over it. 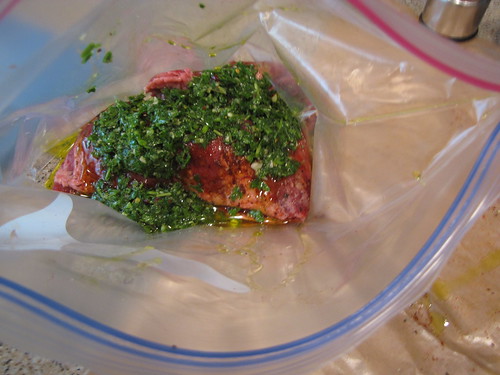 Seal the bag and massage the sauce into the meat. For the best flavor, marinate this for a couple of hours in the refrigerator then pull it out about 30 minutes before you are ready to grill.

If you don’t have that long, marinate for at least 30 minutes at room temperature. 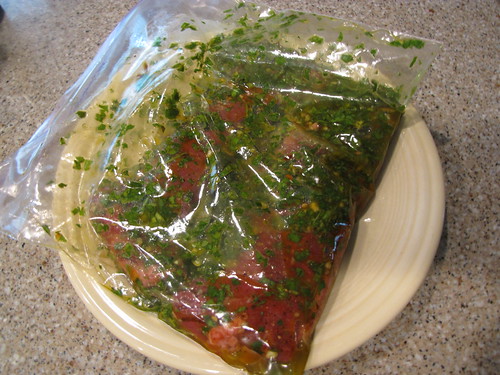 Preheat your grill to high. You could also cook this under a very hot broiler or grill pan indoors if you don’t have a grill.

Remove the meat from the bag (discard the used marinade) and gently blot it with paper towels. This sounds odd to be blotting off your carefully massaged in marinade but we want the outside of the meat to be dry so that it will brown quickly. If the meat is too soggy from the marinade it will steam on the grill.

Plus, we have plenty of extra sauce for topping later. 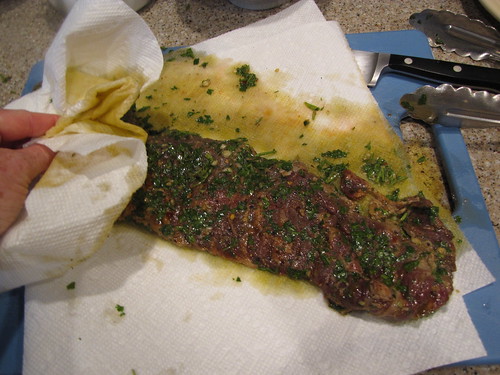 The other good news about grilling skirt steak is that it cooks in a flash.

Place the marinated steaks on a medium high grill and close the lid. Don’t go too far away! These cook very quickly – only about 3-4 minutes for the first side and 2-3 for the second. 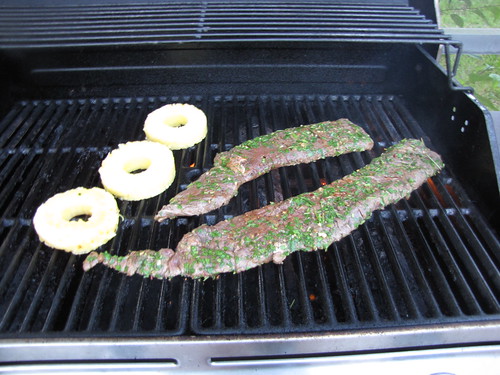 You want the grill very hot but be careful that the flames don’t get so high that they ignite the remaining marinade. 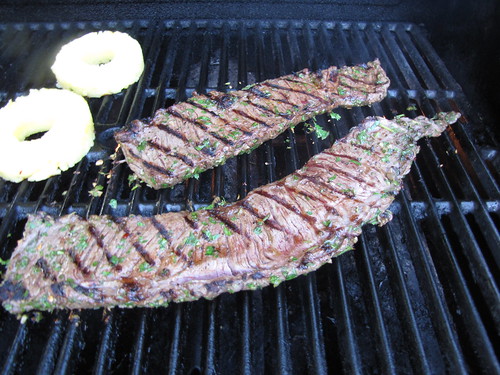 Hey, throw some fresh pineapple on there too! Have you had grilled pineapple? 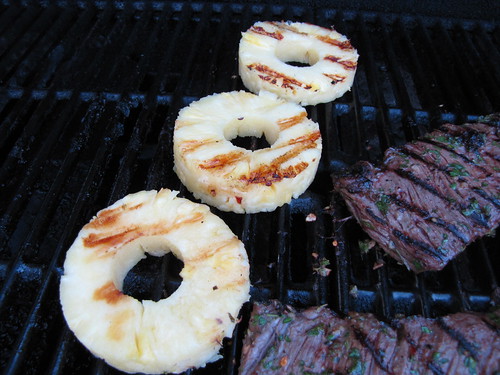 It gets warm (obviously) and the sugars caramelize to take away some of that weird puckery thing that happens with pineapple.

Grilled pineapple goes really well with this since you have all the greens and garlicy sauce with the meat. It’s nice to have a little fresh fruit zing.

Since skirt steak is so thin, you can’t use your meat thermometer but my trick is that once you have pretty nice grill marks and the meat is starting to firm up, you’re done. It really only takes a few minutes per side. If you get it indoors and want to cook it more, you can always return it to the grill. 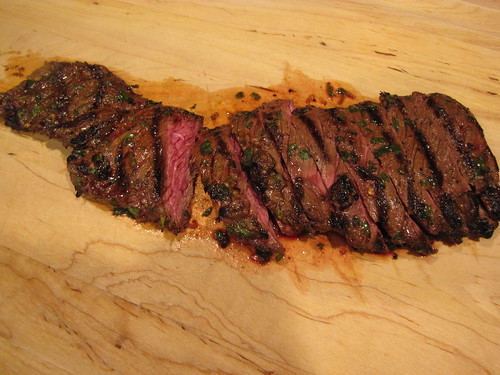 Let the meat rest for at least 5 minutes (cover loosely with foil so it doesn’t get cold) so that the juices can reabsorb into the meat then slice it into thin strips against the grain.

There’s my groovy grilled pineapple ring and I have some easy boiled new potatoes (and there was a green salad) for a side. 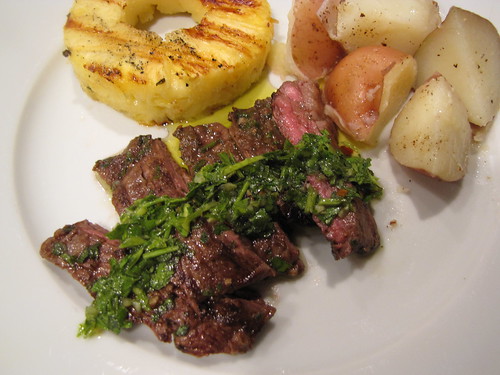 Those potatoes taste great dipped into the extra sauce. And if you’re not a red meat eater (and you’ve actually gotten this far), Chimichurri Sauce is also wonderful on chicken or grilled fish.

Hey, you have an Argentinian Steak House in your kitchen!

(And I had a happy husband.)