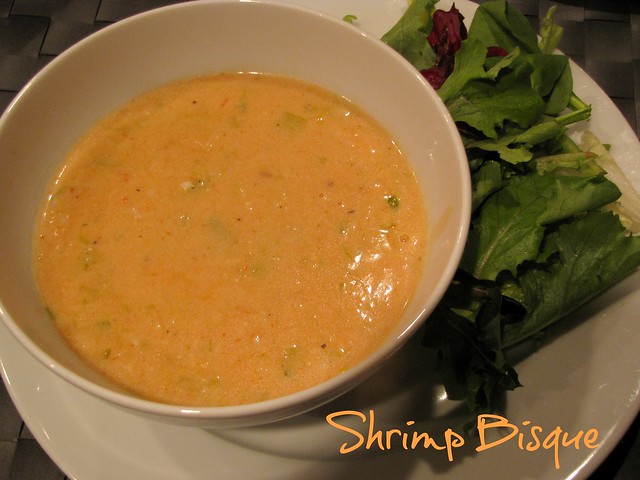 My family has a tradition of having soup for Christmas Eve Dinner.

Usually we have Kansas City Steak Soup (recipe from the Plaza III for those of you KC folks) but this year we celebrated early and in Florida.

To change things up a bit (which I’m allowed to do since I’ll probably still make soup on actual Christmas Eve), we made luxurious Shrimp Bisque with beautiful pink Florida shrimp.

This has a few special ingredients (hello…Brandy AND Sherry) but is well worth a little extra effort. It’s also worth the effort to seek out really good shrimp. They are, after all, the star of the show! 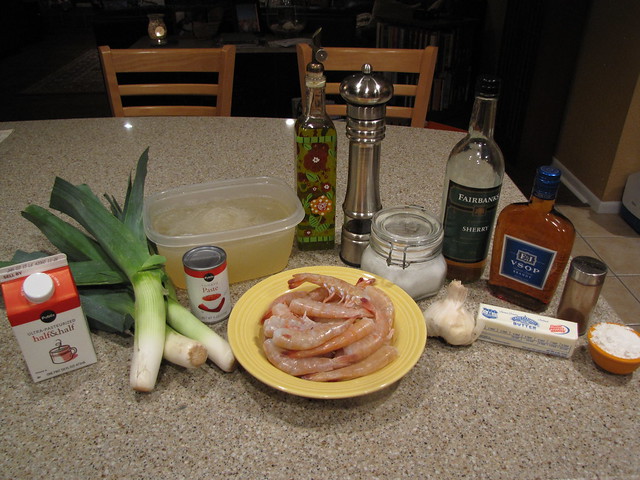 Peel and devein 1 pound of lovely, large shrimp. SAVE THOSE SHELLS!!! They are going in the stock for extra flavor and we will strain them out later. 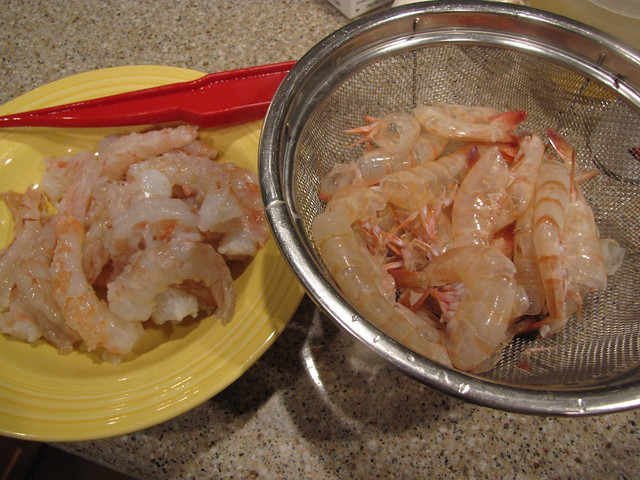 When I was making my list of Gifts for the Cook, I should have included one of those handy Shrimp Peelers.

I bought mine at my local grocery store (look near the seafood counter) for a couple of bucks. Makes a great stocking stuffer if you like shrimp!

Leeks are one of my favorite aromatic veggies. They are related to lilies and are much milder than onions.

Since they are grown in very sandy soil, they often have layers of dirt between the outer leaves. Cut the root off the bottom of the bulb and the tough outer big green tops off leaving just the white and light green parts. 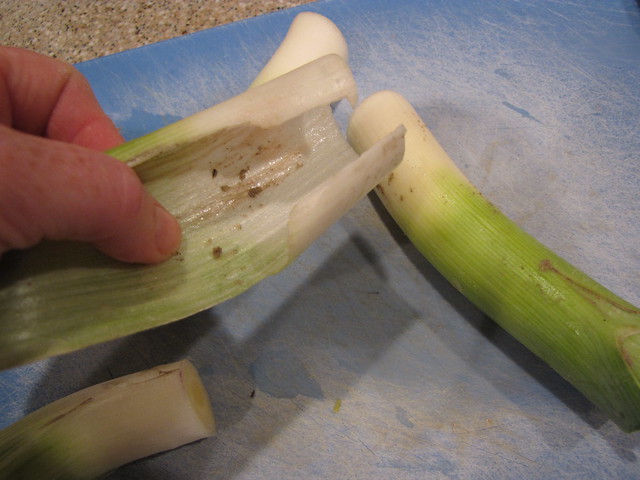 Cut each section of leek in half and pull the pieces slightly apart so you can run them under cool water to remove any dirt in the layers.

When the leeks are clean, chop them up into half rounds. 3 leeks should give you about 2 cups chopped.

While you’re chopping, finely mince up 3 cloves of garlic to equal about 1 Tablespoon. 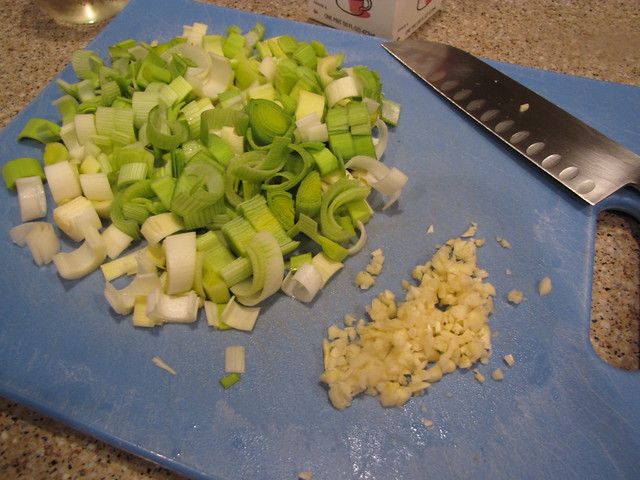 Let’s talk stock. I went all crazy a few weeks ago and made a big pot of homemade fish stock.

Just so I don’t confuse anyone, let me know if you want that recipe. Most people will probably want to go the easier route and purchase already prepared fish stock from the store.

To infuse the fish stock with even more flavor, we are going to quickly roast the shrimp shells. 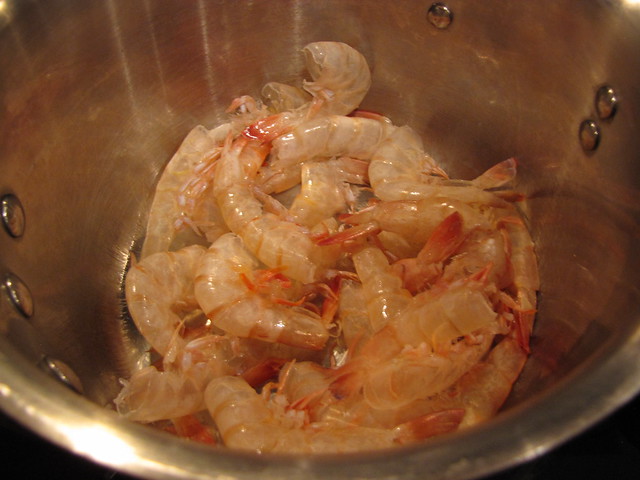 Roast the shells quickly, only 2-3 minutes tops, until they are vibrant pink and smelling very shrimpy.

Add 4 cups of fish or seafood stock to the pan, reduce the heat to medium low, and simmer for 15 minutes. 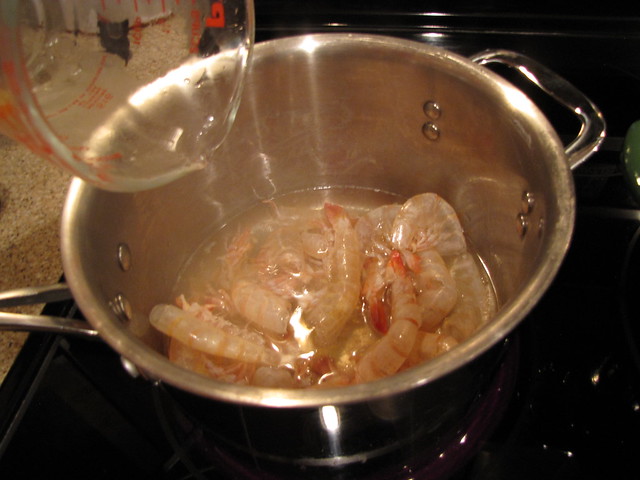 Meanwhile add 2 Tablespoons of olive oil to a large soup pot or dutch oven. Working over only medium heat, add the chopped leeks and cook gently for 10 minutes until they are tender but not browned.

If the leeks start to brown around the edges, turn the heat down to a lower setting. 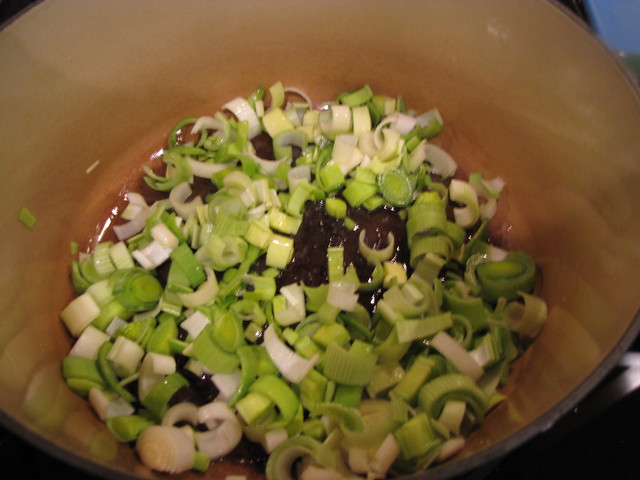 When the leeks are tender, add the peeled & deveined shrimp and the chopped garlic and season with a dash of cayenne pepper. 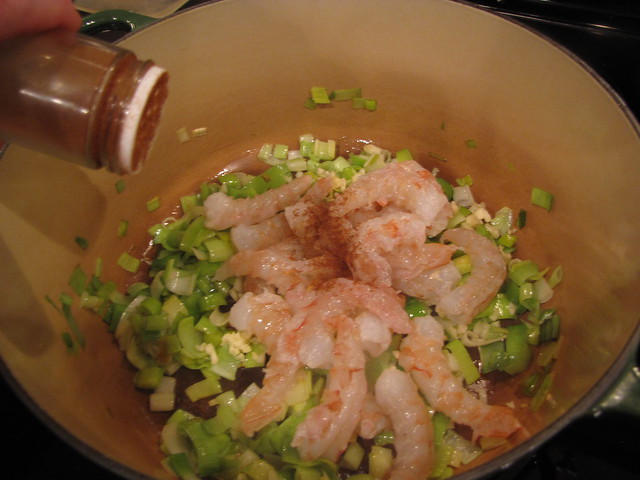 Spread the shrimp out in the pan so they have good contact with the heat source at the bottom.

Cook only for 3 minutes until they are vibrant pink and the edges just start to curl. 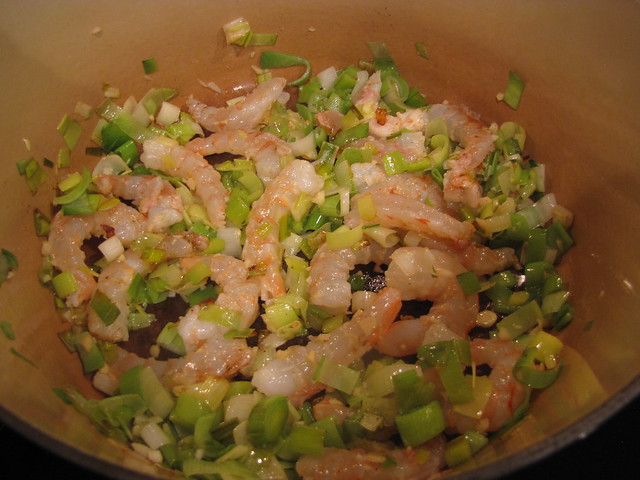 Stir any stuck bits up from the bottom of the pot and cook for 3-4 minutes longer. 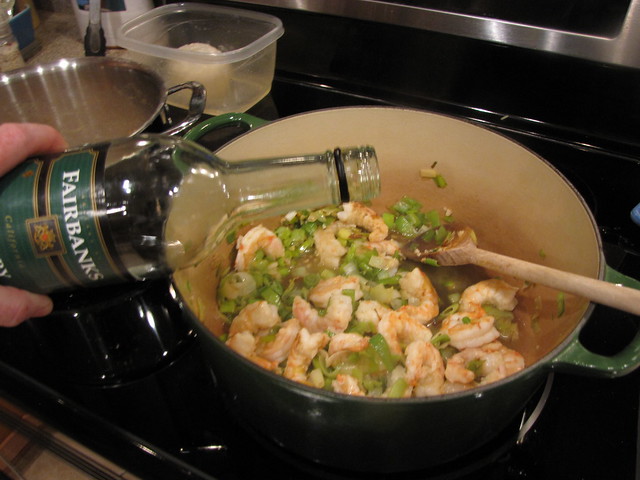 Transfer the shrimp, leeks, and any sauce in the pot to a food processor and use the pulse function to process only until very coarsely chopped.

It’s much better to under chop this than to pulverize it into tiny bits. You still want to be able to see and taste distinct bits of shrimp. Bigger chopping is the way to go. 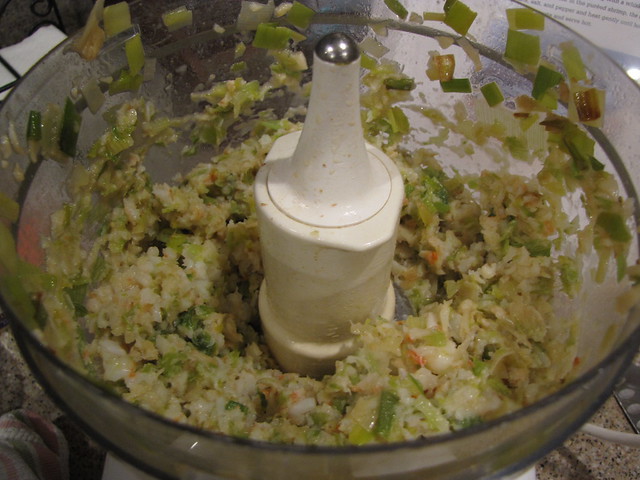 Check back in on your shrimp stock and you should find that by adding the shells, you now have a golden pink broth. 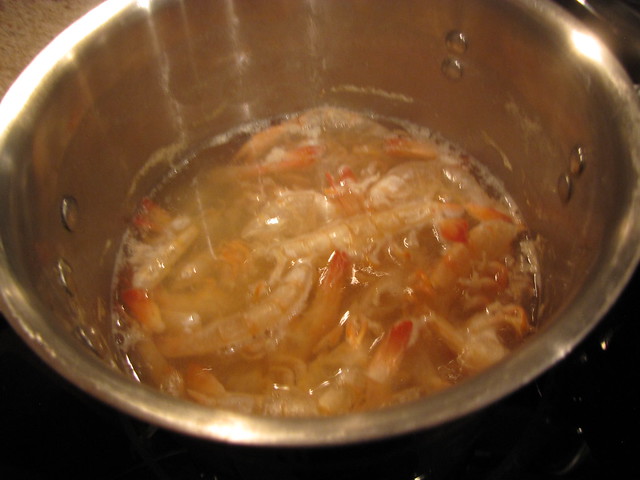 Strain the shells out with a mesh strainer or large sieve and if you need to, add a bit of water so that the strained stock equals 4 cups. 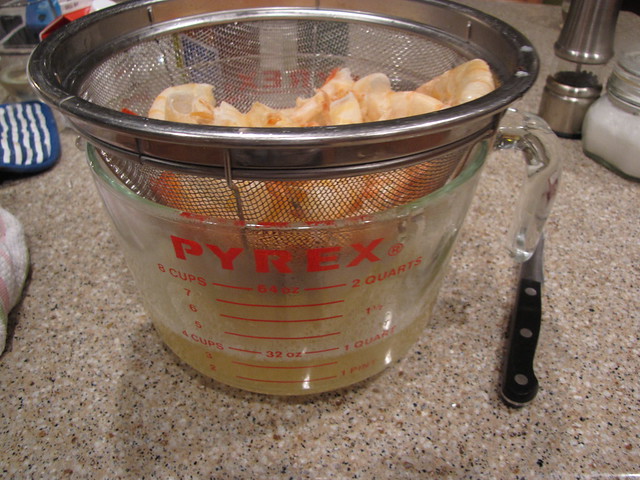 Go back to the pot you used to cook the leeks and shrimp and melt 4 Tablespoons (½ stick) of butter over medium heat.

Cook the roux for 1-2 minutes to incorporate the flour and remove any starchy flavor. 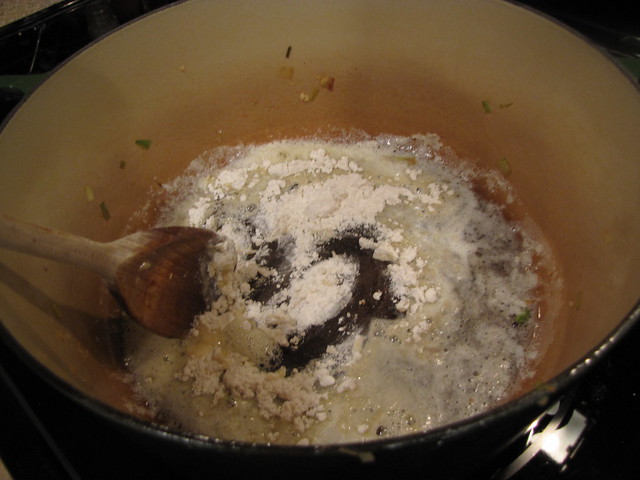 Slowly stir in 2 cups of half & half using a wooden spoon and/or whisk to remove any lumps. 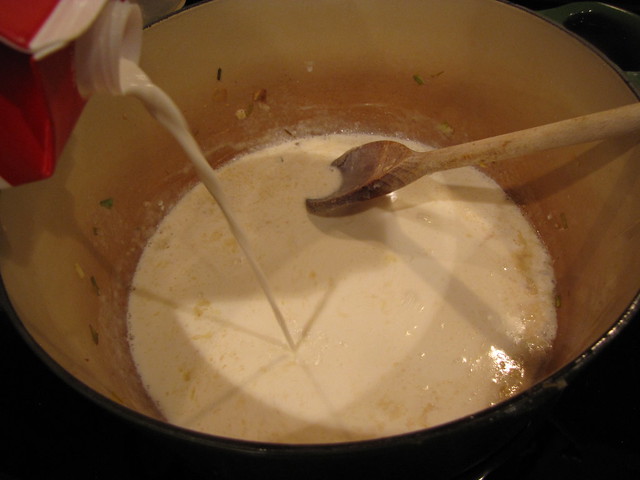 When you have a nice thick and creamy sauce, add the chopped shrimp & leeks to the pot.

Pour in the 4 cups of shrimpy fish stock that you strained and stir to combine. 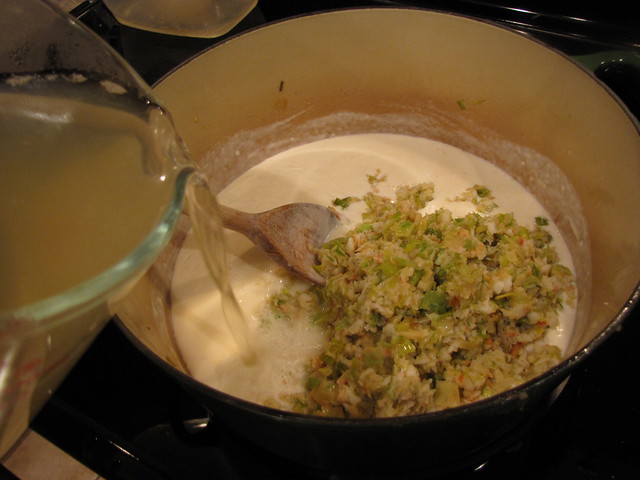 Add 1/3 cup of tomato paste. This helps give the soup a bit more body as well as a beautiful color. 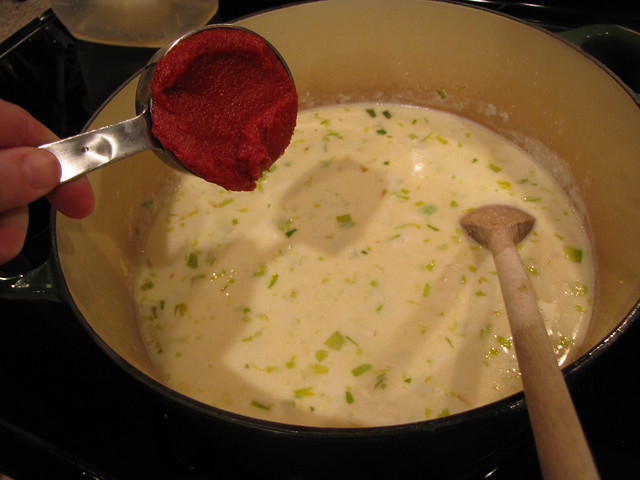 Season to taste with salt and freshly ground black pepper. If you like a little kick, you can add another dash of cayenne. 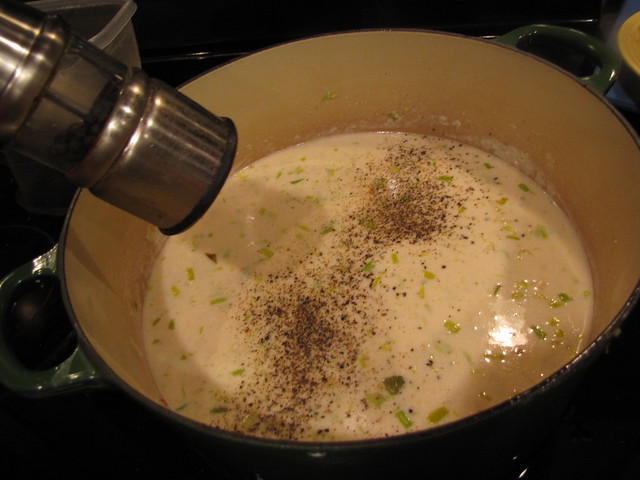 Cook the soup over LOW heat for about 5 more minutes just to incorporate all the flavors and to be sure everything has heated through.

It is important that the soup DOES NOT BOIL once you have added the half & half or you risk having it curdle and get weirdly lumpy.

Serve a bowlful of velvety shrimp bisque with a simple green salad and some crusty bread. 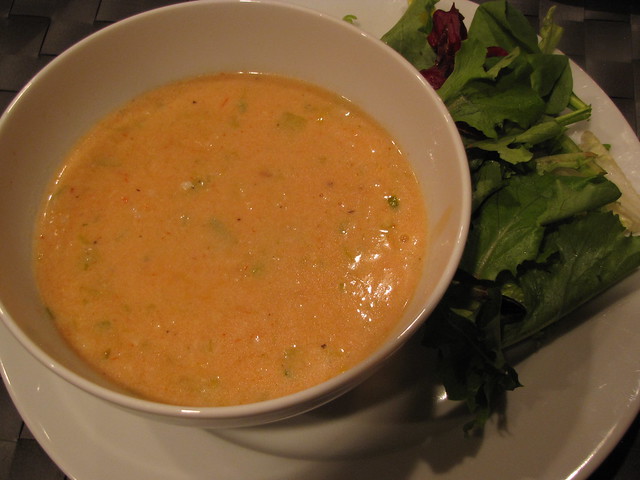 If you want to be super fancy, save a few cooked shrimp before you put everything into the food processor and chop them for a garnish.

Nikolay served his that way and it was beautiful. I forgot but mine was still plenty delicious!

As shown here, this recipe makes 4 servings. It can easily be doubled to serve more people.

It’s also excellent leftover…gently reheated, poured into a thermos, and slurped while driving down I-75 to Miami.

Shrimp Bisque might become the new holiday tradition at our house!