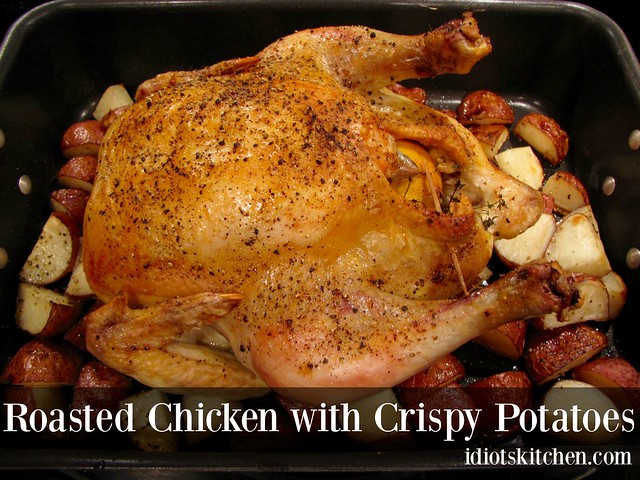 I love a good roasted chicken.

Did you know that with all the fancy French recipes that she wrote and published, Julia Child thought that the true test of a cook was if they could make a good roasted chicken?

We’ve had several roasted chicken recipes here but I’m always on the lookout for something new to add to the chicken repertoire.

The chicken part of Roasted Chicken with Crispy Potatoes came from a recipe from Melissa Clark of the NY Times. Unfortunately for me, her original recipe, which I think you should also try, did not have crispy potatoes but had crispy bread croutons.

Sadly there can be no bread croutons for me because I have to be gluten free, but happily the potatoes I substituted got deliciously golden and crispy, enriched by the drippings from the chicken.

The other happy thing about this recipe is that it’s super simple to put together. 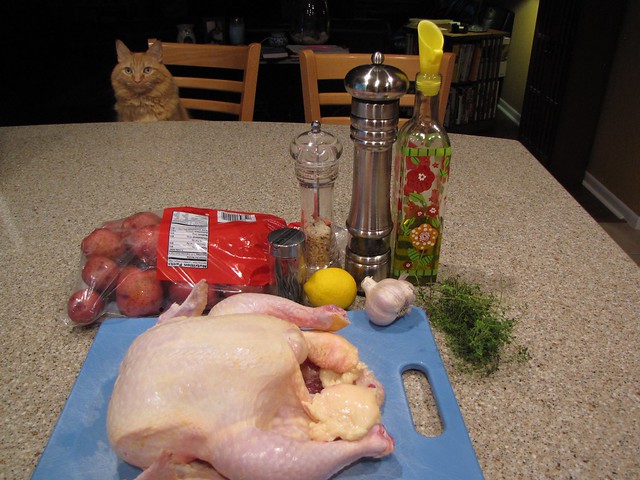 Cut about 2½ – 3 pounds of small red skinned potatoes into halves, or quarters if they are larger, and place them in the bottom of a roasting pan.

Drizzle with 2 Tablespoons of olive oil, season with salt & pepper, and toss to combine and coat. 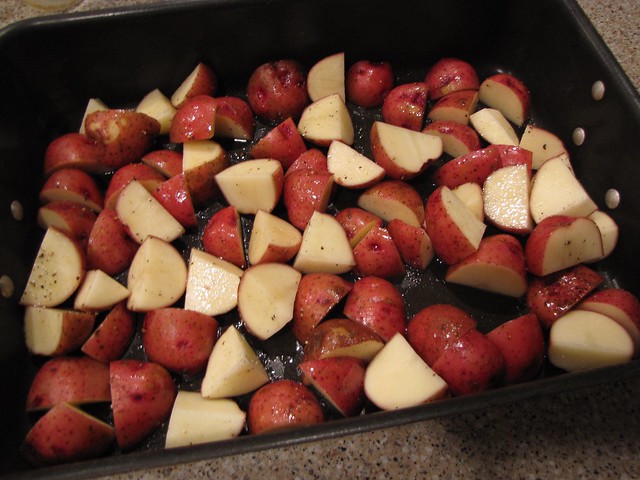 We’re going to stuff the cavity of the chicken for extra flavor. This isn’t stuffing you would eat but rather herbs, garlic, and lemon to season the chicken from the inside out as it cooks.

Rinse a 4-5 pound chicken under cool water, remove any giblets, neck or other parts from the cavity, then pat dry inside and out.

This is a very important step to having a good, juicy, golden bird. Trim off any big pieces of excess fat at the opening of the bird but leave the flaps of skin.

Cut a lemon in half and save one half for a garnish. Cut one whole head of garlic in half horizontally through the cloves. Keep the halves intact rather than separating the cloves. 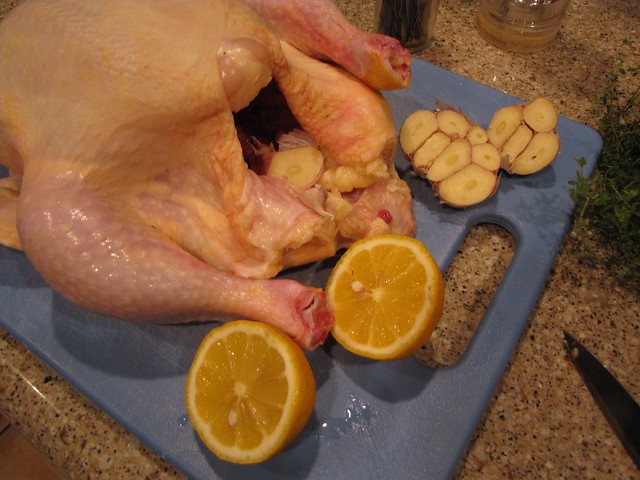 Season the inside cavity of the chicken with salt & pepper and then stuff it with the halves of garlic, half of a  lemon, 1 bay leaf, and about 12 sprigs of fresh thyme. 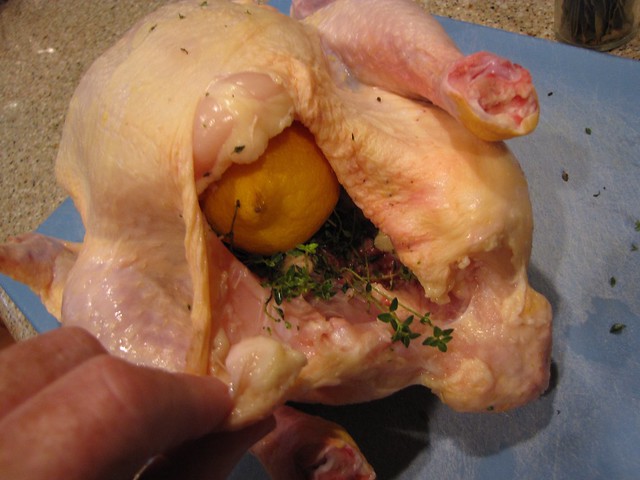 I like to do my famous half-assed trussing method of sticking a toothpick between the two flaps of skin to slightly close the opening to the cavity of the chicken.

You can also use a piece of kitchen twine to tie the legs together. I usually do as it makes a bit tidier bird, but apparently I forgot here and the chicken was just fine. 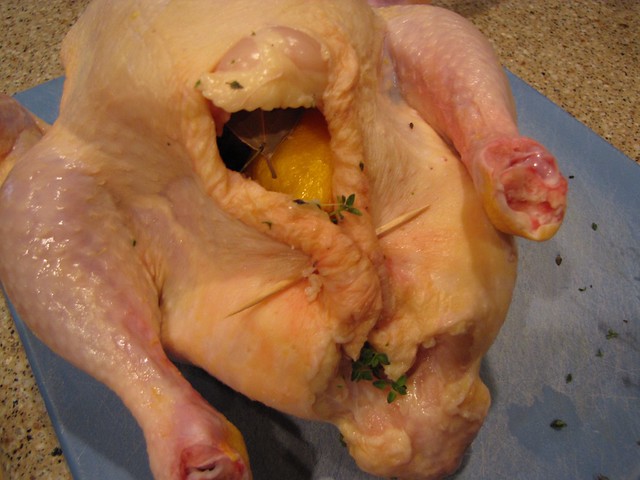 Rub 1 Tablespoon of olive oil on the outside of the chicken (butter would be good too, of course) and season it liberally with salt & pepper.

Place the chicken breast side up on top of the potatoes. You can tuck the wings under the legs if they are weirdly poking out at all angles. 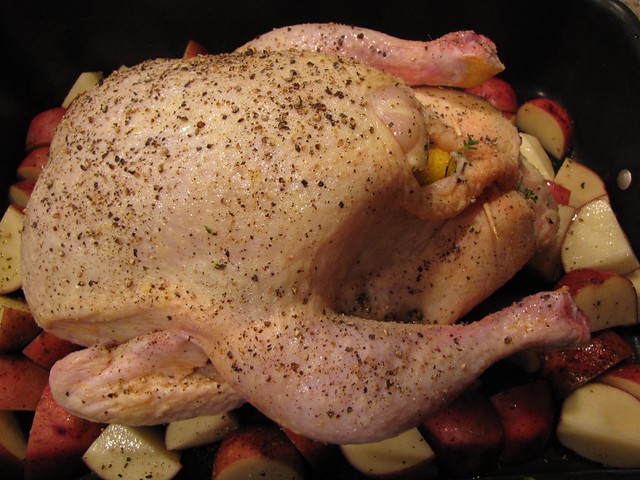 Roast the chicken at 425° until it is golden brown, about 75 to 90 minutes. Your best tool is an instant read thermometer. It should read 160° when inserted by the meaty part of the thigh. 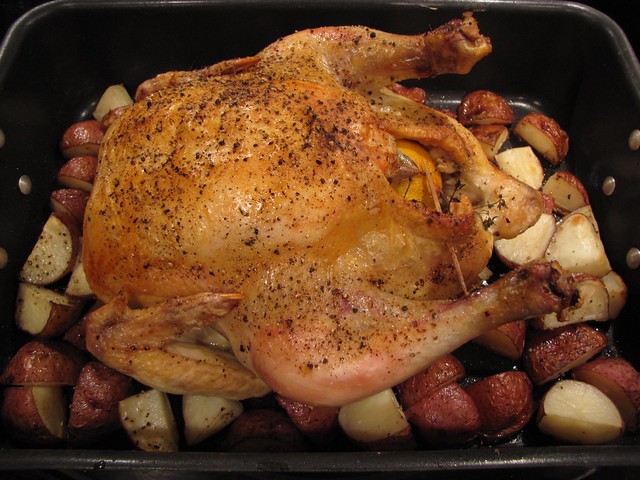 Allow the chicken to rest, lightly covered with foil for 10 minutes before serving.

During that 10 minutes, if your potatoes are not completely golden and crispy, toss them in the drippings in the pan and return them to the oven. Trust me when I tell you that you want the golden, crispy potato edges. 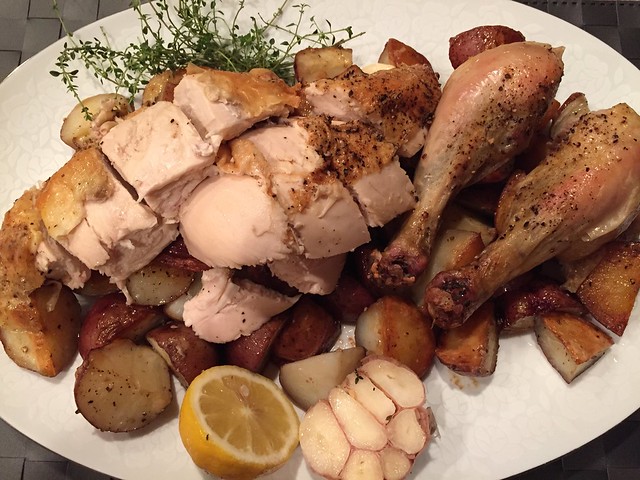 Grab a green veg or quick tossed salad and dinner is served.

If you did all the cooking, I give you permission to pick out the crispiest potatoes for yourself!