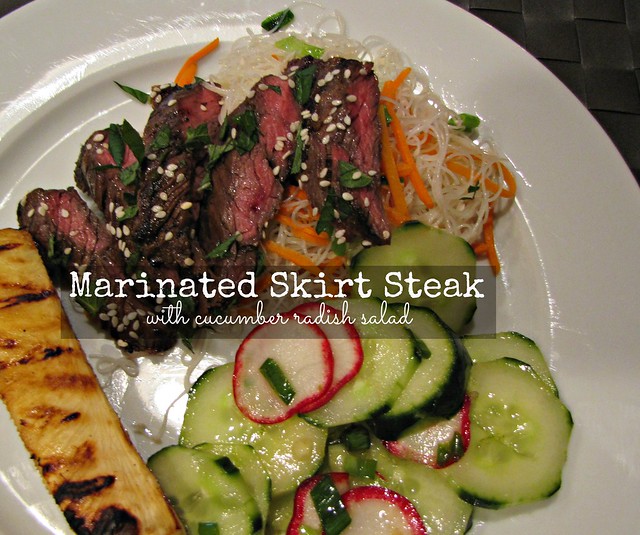 Time to fire up the grill for an unusual but extremely tasty dinner.

A simple marinade provides depth of flavor to the steak which cooks quickly to tender deliciousness on the grill.

A crisp salad of cucumbers & radishes, along with some rice noodles rounds out the meal. 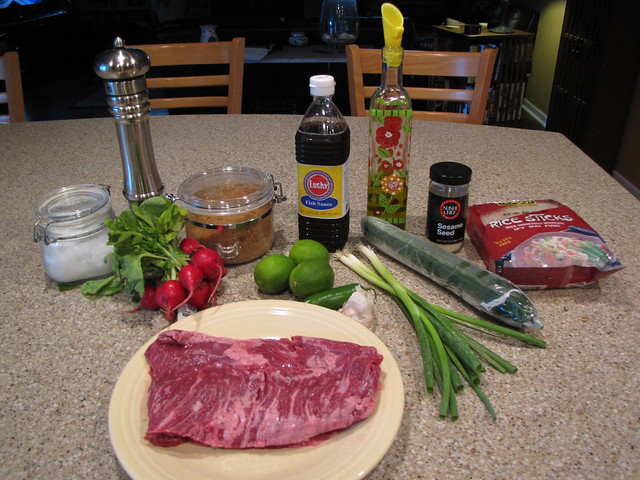 One of the things that I love about this recipe is that the meat marinates in only about 30 minutes. You can put this together right before you cook rather than having to remember to marinate hours earlier.

If you are one to plan ahead, the original recipe does say that you can marinate the meat longer if you’d like, up to 24 hours, but the flavor from only marinating 30 minutes was extremely prominent so I wouldn’t worry about needing to marinate it for hours on end.

Use a microplane or other small grater to remove the rind or zest from 2 limes, equal to about 1 Tablespoon. 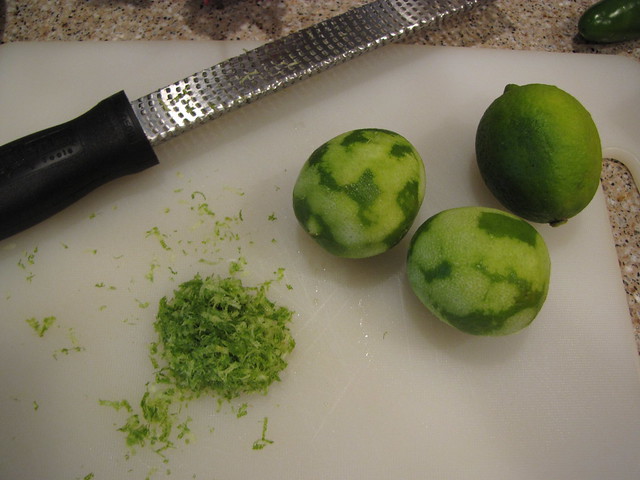 Squeeze the juice from 3 limes to equal 1/3 cup. 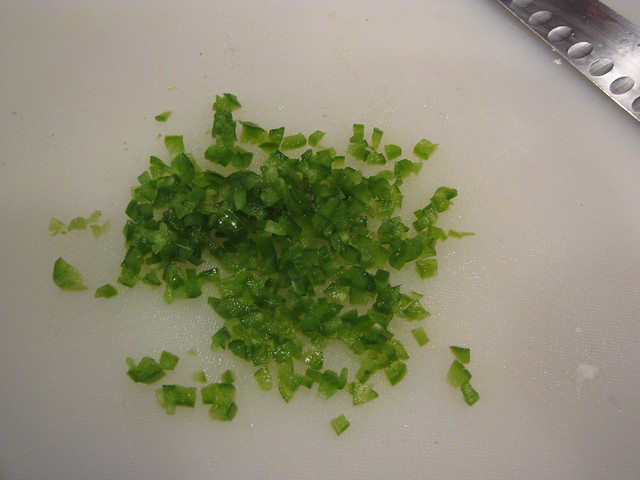 The basis for this marinade is fish sauce. If you haven’t used fish sauce before don’t fear…it sounds weird but is a staple of Asian cooking made from fermented fish and salt. It’s a thin liquid like vinegar and is easily found in Asian markets and most regular grocery stores.

It’s only a couple of bucks for a big bottle so you’re not breaking the bank here on some specialty ingredient. Plus you can toss it in to curries, salad dressings, or stir fries for extra flavor. On it’s own it smells pretty odd, but it’s quite a magical addition to Asian cooking for really pumping up the flavors.

Save a bowl and mix everything right in your measuring cup.

Use your microplane or grater to grate in 2 cloves of garlic. Stir to combine. 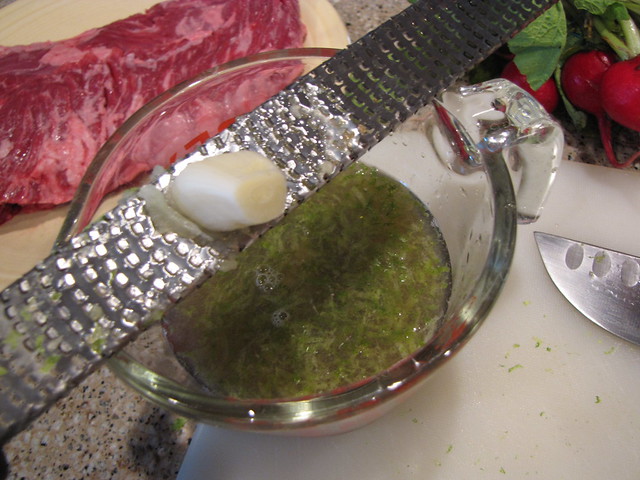 The original recipe called for flank steak but that can sometimes be rather tough so I opted for the thinner, more marbled cut of skirt steak.

Let me just give a big warning here…if you are someone who likes your meat well done, this is not the recipe for you. Skirt steak, like its friend flank steak, is one of the more dense cuts of meat. That’s why you’ll almost always find recipes for these cuts to be marinated before cooking. Both flank and skirt steaks benefit from being cooked quickly to medium rare or medium at the most. The longer you cook these, the tougher they get.

It took me a while to realize that. Once you get the hang of cooking skirt steak quickly at a pretty intense temperature, you’ll be amazed at the tenderness and incredible flavor of this often overlooked cut of meat.

Place 1½-2 pounds of skirt steak in a flat baking dish. Pour HALF of the marinade mixture over the meat and let it marinate at room temperature for 30 minutes. 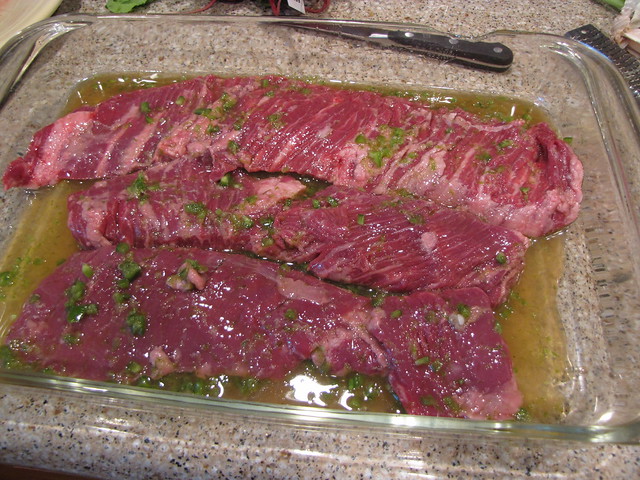 Obviously if you’re one of those plan ahead people and are marinating it longer, put it in the fridge. Just be sure to let the meat come back up to room temperature before you cook it.

While the meat marinates we can make the salad.

I have 1 long hot house or English cucumber that I have mostly peeled. I like to cut big strips of the peel off but leave some on for flavor and also appearance.

If you are using a traditional garden cucumber, be sure to scrape out the seeds. Slice the cucumber into very thin discs. 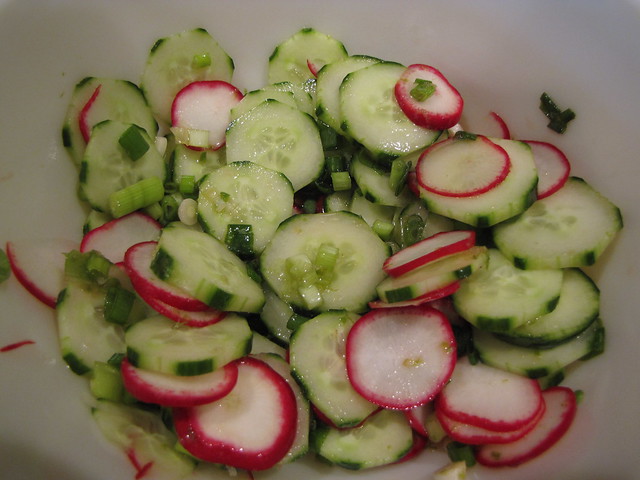 Add the cucumbers, radishes, and green onions to a bowl and dress them with just enough of the marinade you reserved from the meat to coat all the veggies.

Keep the remaining marinade to serve as a dipping sauce for the cooked steak.

In keeping with the Asian theme of the marinade I decided to serve this on a bed of thin rice noodles. These are also easily found in the regular grocery store and are so thin that they don’t even require real cooking.

The noodles will come in a stiff block. Simply separate out a portion of the noodles (I used about 1/2 the package) and soak them in hot water until they are soft. 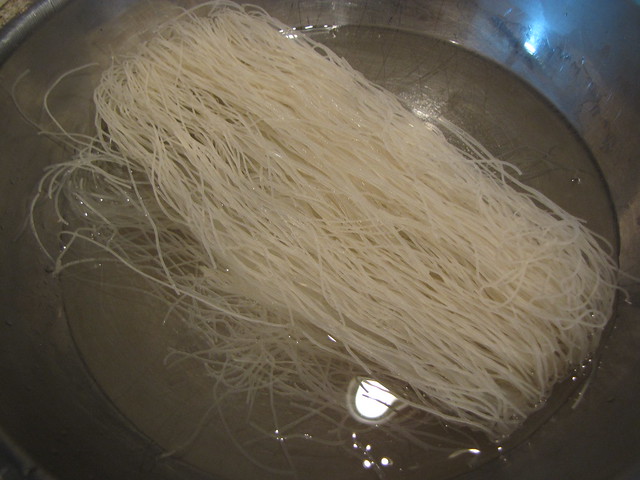 If you want your noodles to be hot when you serve them, just use hotter water (almost boiling) and the noodles will stay warm until you are ready to serve. 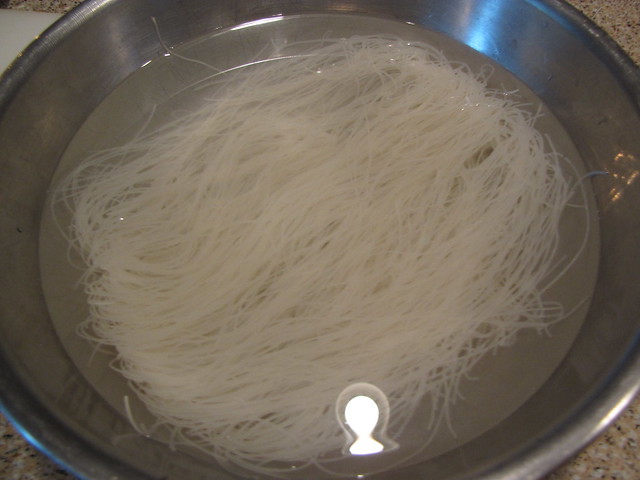 Preheat a grill or broiler to high. The original recipe has instructions for a hot pan/oven broiler method. I think you could also cook this simply under the broiler if you don’t have access to an outdoor grill.

Remove the meat from the marinade and pat it dry on both sides with paper towels.

Dry meat will brown better than soggy meat so don’t skip this step. All the flavor is soaked in so you aren’t losing anything by drying the surface of the meat. 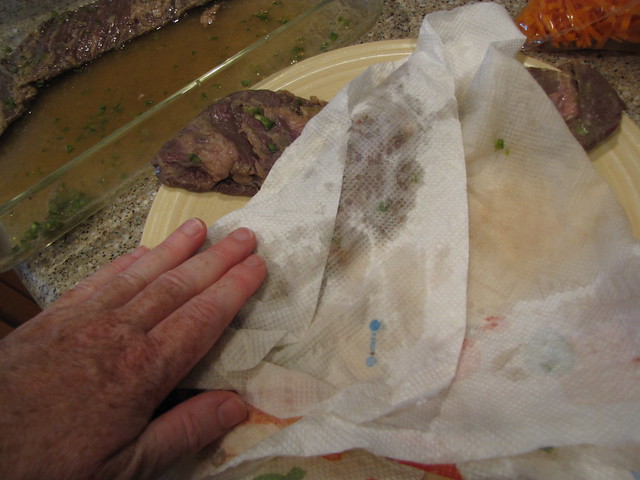 Oil the grates of your grill, then place the meat over medium high heat.

I also have some spears of pineapple tossed on the grill. If you haven’t had grilled pineapple, you are SERIOUSLY missing out.

The meat cooks QUICKLY, only about 2-3 minutes per side. My rule of thumb is once it has good grill marks, turn it over.

Don’t walk away and go do something else or you will over cook your thin strips of steak. 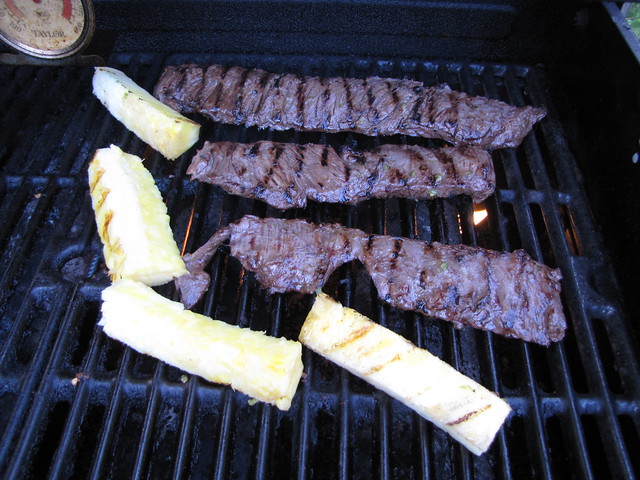 When the meat has cooked 2-3 minutes per side for medium rare, remove it from the grill, cover loosely with foil, and let it rest for 10 minutes.

Drain your noodles. For extra veggies, color, and flavor, I tossed the noodles with about 1 Tablespoon of olive oil and a handful of shredded carrots. 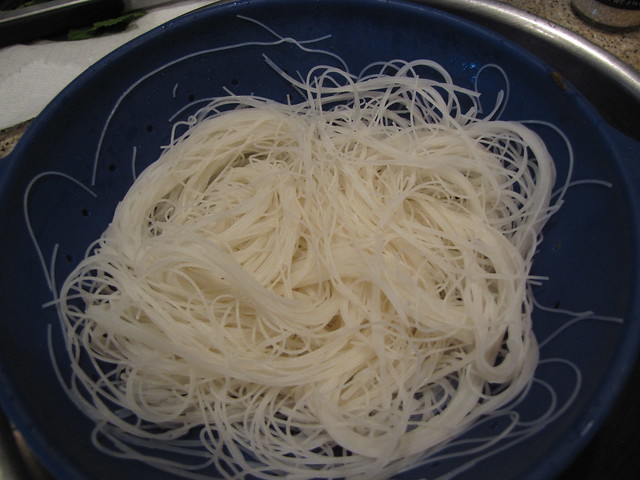 After the skirt steak has finished resting, the juices should have absorbed back into the meat.

Cut the marinated skirt steak into thin strips cutting across or against the grain of the meat. 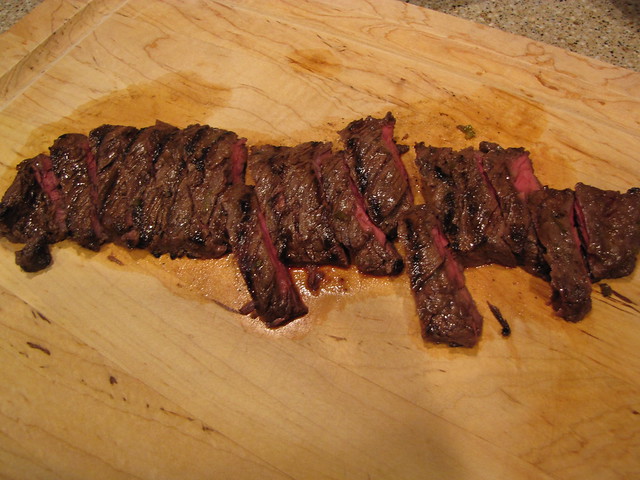 Top the sliced steak with a few sesame seeds and some freshly chopped mint. 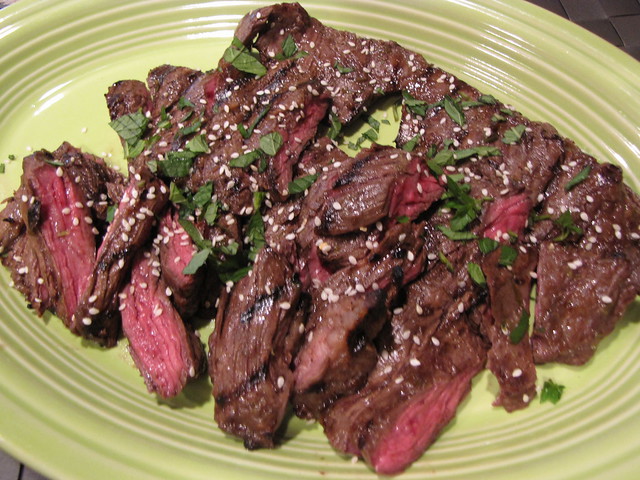 Serve the meat on a bed of noodles with a big spoonful of the cucumber radish salad.

I drizzled just a bit of the extra marinade over the meat and noodles. Mmmmmm!

Season as needed with salt & pepper. I don’t think it needs a thing…but go with your own personal taste. 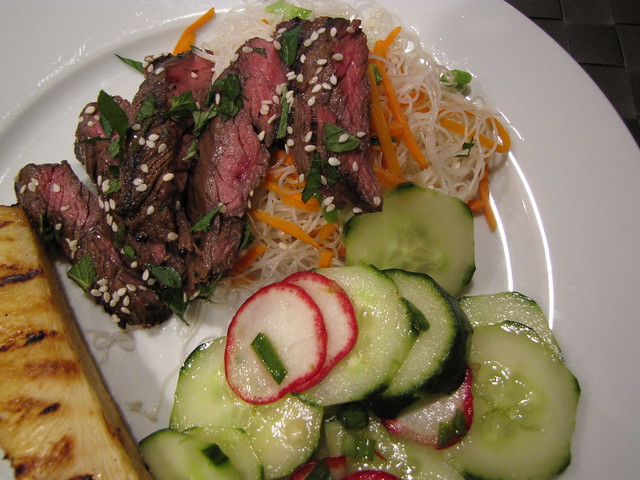 The flavors are out of this world delicious, the steak tender, the salad crisp and zingy.

We loved this meal! Leftovers were just as good the next day.

I’m already watching my store for skirt steak to make this again this week!

Here’s the recipe – Adapted from The New York Times