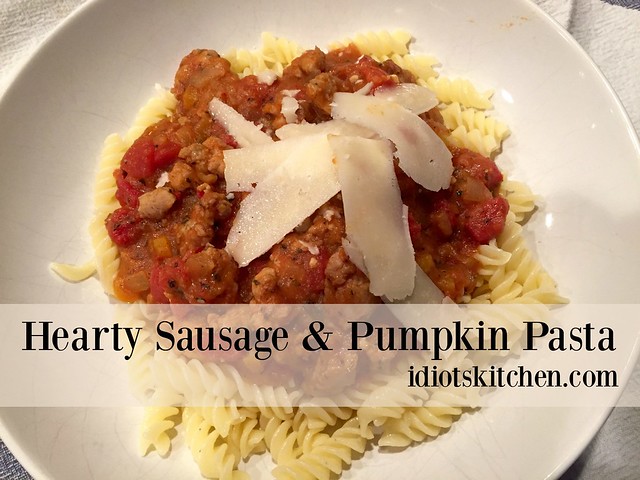 We’re back with what might seem like an odd combination – sausage & pumpkin, but one that has quickly become one of my favorite, easy pasta sauces:  Hearty Sausage & Pumpkin Pasta.

I got this recipe from the grocery store just before Thanksgiving, when I’m sure they were trying to move the cans of pumpkin out the door.

I’ve made it three times now and think I’m finally done fiddling around with the recipe. The good news is that I’ve made it even easier and tastier! 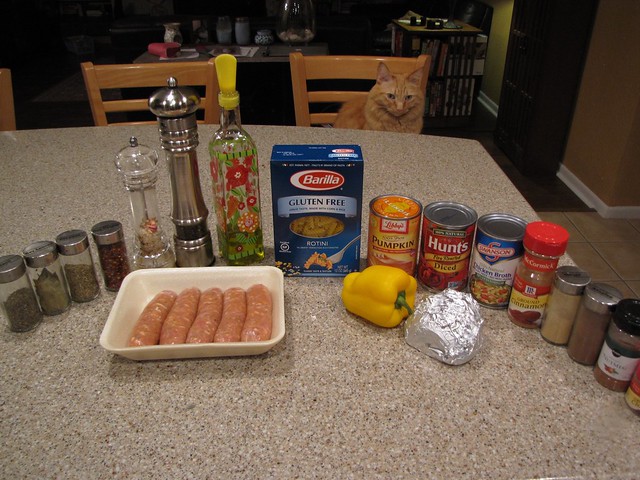 Also highly recommended (but not shown) is parmesan, romano, or goat cheese for serving.

Let’s talk about that ingredient photo. It was taken prior to my tweaking and I now don’t use any of the spices on the right side of the photo except for the cinnamon. The recipe called for pumpkin pie spice which I do not own and never buy since I have all the other individual spices. After making it the first time, it’s such a small amount that I leave it out entirely and do not miss it one bit.

Also, yes, that’s half an onion wrapped up in aluminum foil. Geez. Sometimes I look back at these photos and just shake my head. At least I got a nice shot of Henry!

Finely chop 1/2 a medium onion and 1 small bell pepper (I usually use red but only had yellow here…any color but green which is a bit bitter when cooked) to equal about 1 cup each. 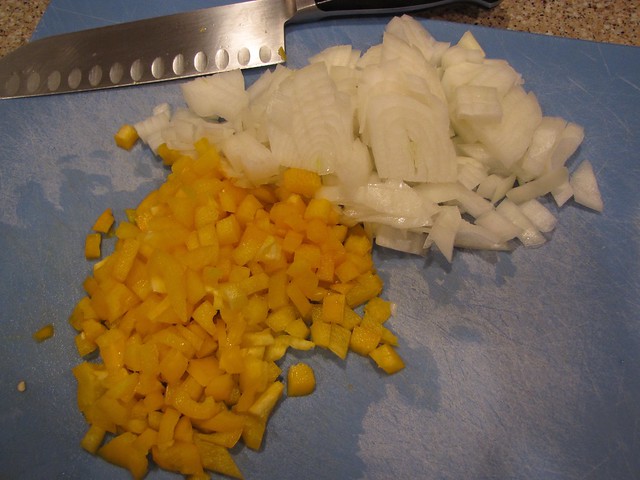 Heat 2 Tablespoons of olive oil in a large pot over medium high heat. Add the chopped onions and bell peppers and sauté 3-5 minutes. Adjust the heat lower if necessary to keep the onions from browning. 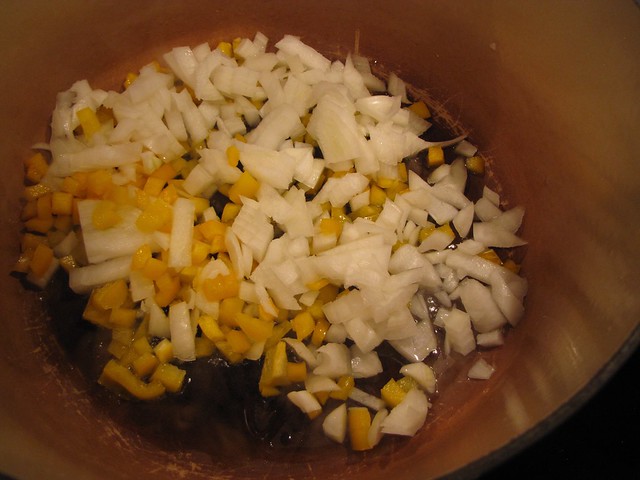 I love that this recipe uses chicken sausage. It makes it a lighter flavor than pork but still with all the Italian sausage seasonings.

Remove the casings from 1 pound of mild Italian chicken sausage and add it to the pan. Use a spatula or big spoon to break the sausage apart as it cooks. 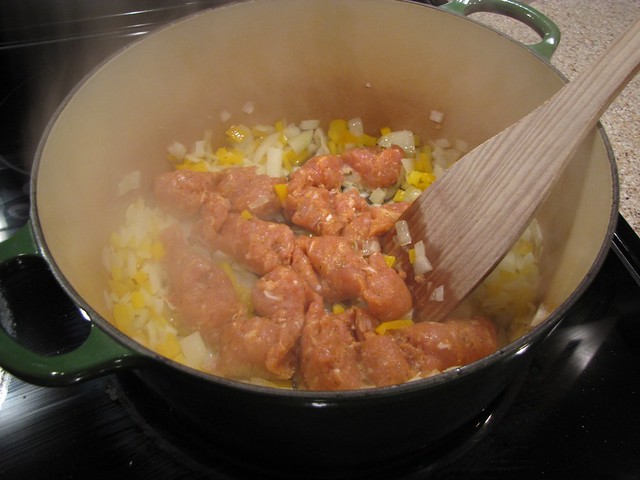 Brown the sausage, crumbling as you go, for about 5 minutes or until no more pink remains.

Season with 1 Tablespoon of Italian seasoning OR 1½ teaspoons each dried oregano and dried basil. Toss in 1 bay leaf and a generous pinch of red pepper flakes.

Add a dash of cinnamon. I didn’t care for this with all the other pumpkin pie spices but the cinnamon adds just a little hint of extra warmth. With just a dash (maybe 1/4 teaspoon at the most), you get just a suggestion of the spice…enough to make you wonder what is in the sauce but not wonder why it tastes weirdly of cinnamon toast. 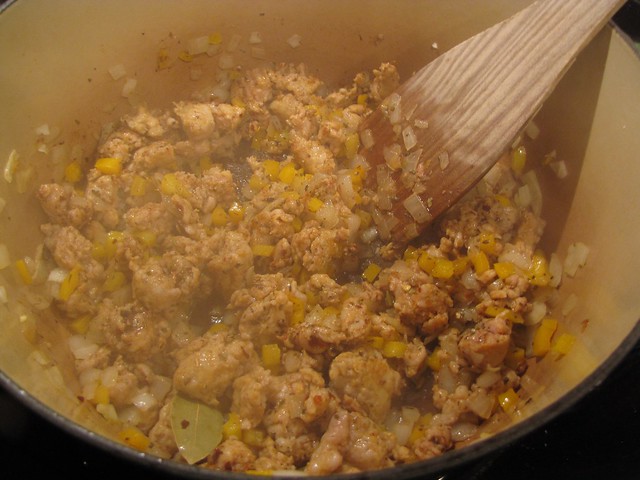 Pour in 1 cup of chicken broth. You might need to add more later so keep the remainder of the can handy. I usually end up using about ¾ of the can. 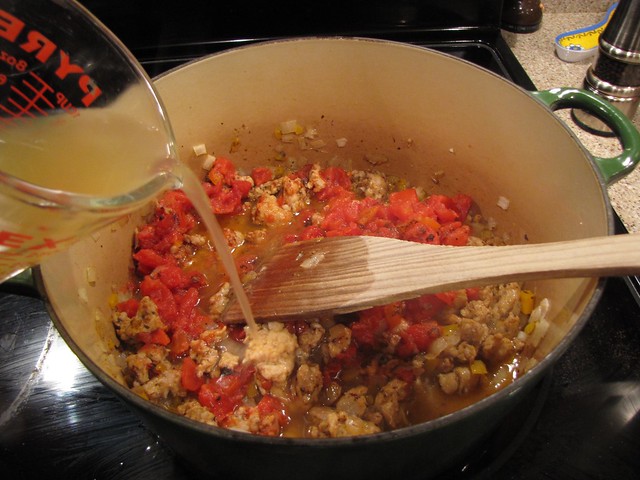 Then add 1 can of pumpkin puree. The original recipe only used 1 cup (about 2/3 of the can) but I got tired of having a small dab of pumpkin leftover in my fridge and feeling guilty about throwing it away a week later so in it goes. If we’re eating pumpkin on pasta, let’s really go for it! 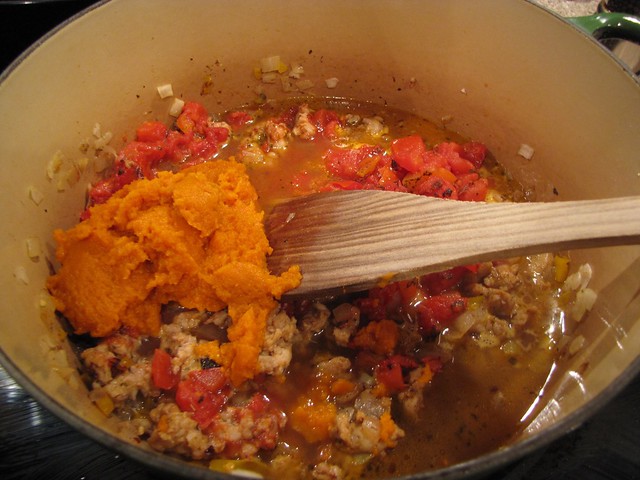 When you think about it, the whole pumpkin spice hoopla sort of gives pumpkin, a squash, a bad rap. Pumpkin, like butternut squash, is savory, hearty, and really, really good for you.

As you can see, it thickens the sauce nicely and with only the dash of cinnamon mentioned above, is not at all a sweet addition to the sauce.

Season with 1 teaspoon each salt & pepper, bring the sauce to a boil, reduce the heat to low, cover and simmer for 15-20 minutes. 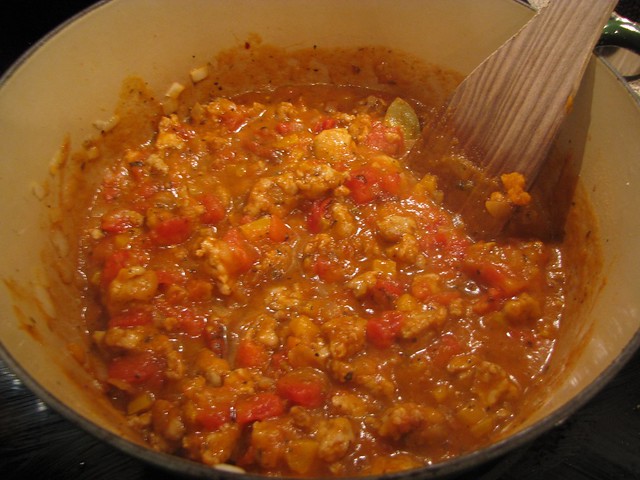 If you’re not in a rush and can cook the sauce a little longer, all the better for the flavors to incorporate and develop. If your sauce is extremely thick, add a little more chicken broth to get it a saucy consistency.

Cook your favorite kind of short pasta like rotini (spirals) or penne according to package directions.

Spoon the pasta over the sauce and top with shavings of parmesan or romano cheese OR for something even creamier, add a few dollops of goat cheese! I served goat cheese the last time I made this and it’s oh so creamy and delicious. 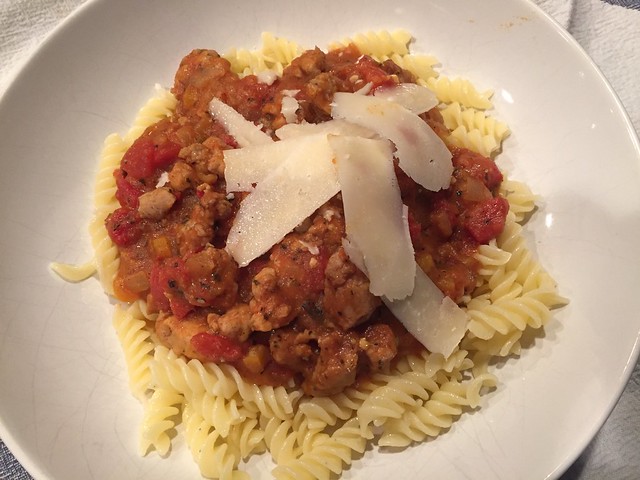 As I said, I really love this sauce. If you’re looking for a quick and easy weeknight meal, you can have this on the table in about 30-40 minutes. If you have a little more time, or even want to make the sauce ahead, the flavors only improve with a little longer cooking time.

Here’s the recipe:  Adapted from Publix