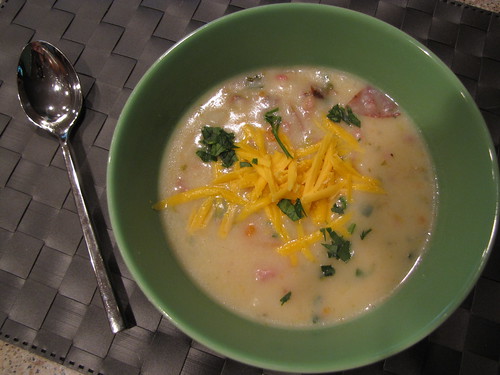 Ham & Potato Soup is calling to you.

Well, actually it might be calling to the ham bone that you hopefully have leftover from Easter.

There’s nothing better for making a few simple ingredients really sing than a good, flavorful, meaty ham bone. Jim used to get a gift box from Honeybaked Ham at work and the ONLY thing out of the box that I laid claim to was the ham bone. Everything else went back to the office for a holiday lunch, but woe to him if he did not first remove the ham from that bone.

If you don’t have a ham bone on hand, don’t let that stop you from making this soup. You can buy them at any Honeybaked Ham store. Sometimes my store even has buy one, get one free so I usually get one for the freezer.

This soup feels a lot more decadent than it really is. By mashing some of the potatoes, we can thicken the soup and make it a velvety texture without adding tons of flour, butter, or cream. Not that there’s anything wrong with butter and cream… 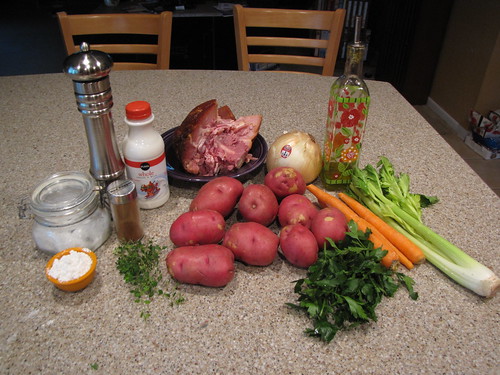 Heat 2 Tablespoons of olive oil in a large soup pot over medium high heat. Add the onion, carrots, and celery and sauté until tender but not browned, about 5-7 minutes. 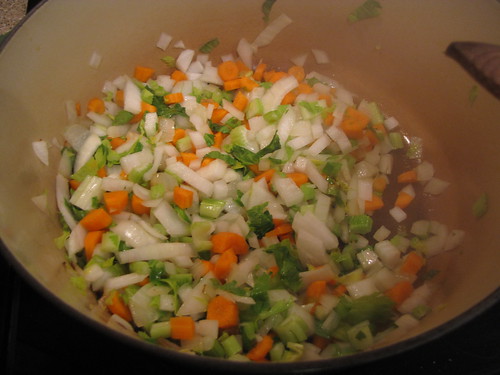 Add the ham bone and enough water to cover it – about 6 cups.

Toss in a few sprigs of fresh thyme if you have them. Otherwise use about 1/2 teaspoon of dried thyme. 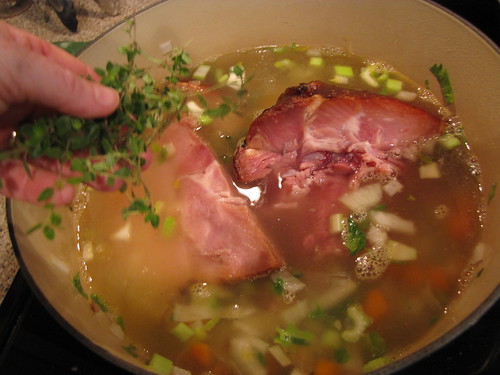 Bring the pot to a boil, reduce the heat to low, cover and simmer for at least 30 minutes. This is turning your ham and vegetables into a flavorful stock for the rest of your soup.

While the stock simmers, cut 2-3 pounds of potatoes into large cubes. I have red skinned potatoes and have left the skin on but really, any potatoes will do. Peel them if you like, but I almost never do. 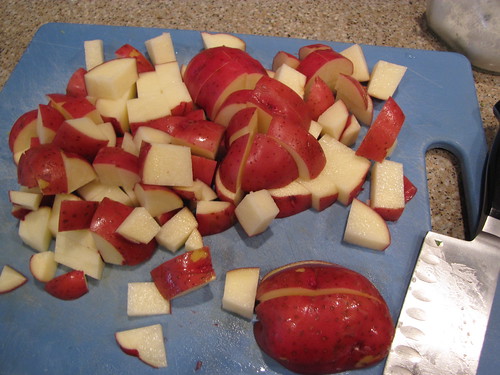 After 30 minutes (or more – I think mine cooked for at least 45) remove the ham bone and set it aside. Add the potatoes and bring the pot back up to a boil. Once boiling, reduce the heat to low, cover, and simmer for 20-30 more minutes or until the potatoes are fork tender. 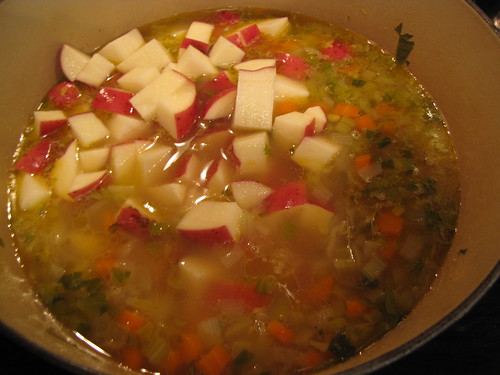 When the potatoes are tender, use a masher to smash about half of the potatoes. I like to go old school with the hand masher rather than using a blender because I want to be sure that this soup is still mostly chunky and not a smooth puree. 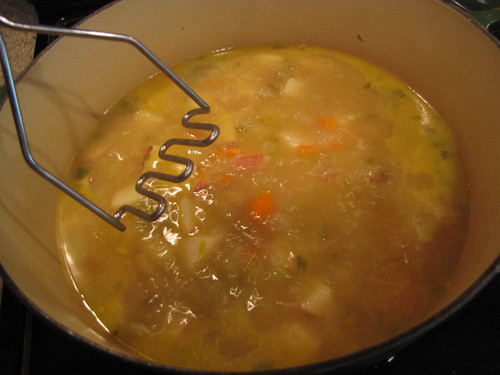 Pick as much of the meat off of the ham bone as possible and shred or dice it into bite-sized pieces. Add the ham back to the soup pot. 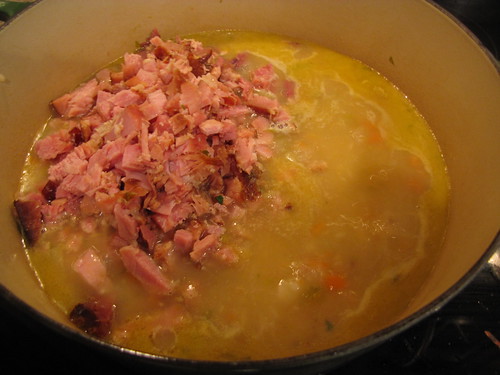 I like this soup only moderately thick. I’m not a huge fan of those gluey potato soups where you can practically stand your spoon straight up in the bowl.

To thicken the soup but avoid lumps, whisk 1/4 cup of flour (gluten free flour is fine) into 1 cup of whole milk until smooth. 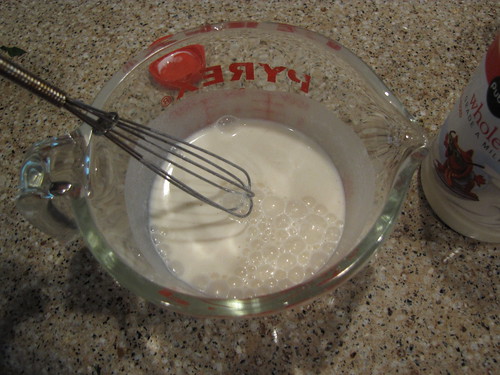 This is called making a slurry and is a pretty nifty trick to quickly thicken a sauce or soup without lumps. Pour the thickened milk into the pot and stir to combine. 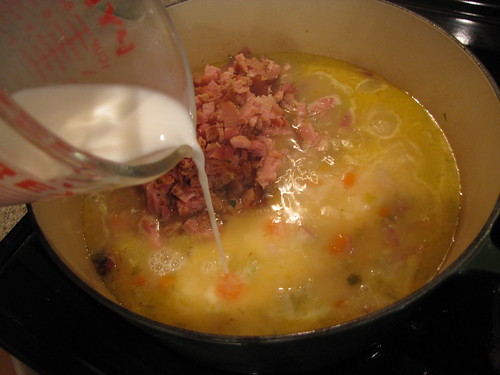 Bring the soup back up to a simmer so that the flour can get to its maximum thickness. At this point, if you like the consistency of your soup, great. If it’s a little too thick, add more milk until it is to your liking.

Season the Ham & Potato Soup with 1/4 cup of freshly chopped parsley, 1/2 teaspoon cayenne pepper (or more to taste), 1/4 teaspoon nutmeg, and salt & pepper. For me, the ham is salty enough but most people would probably like a bit more salt added. Taste and season to your own preference. 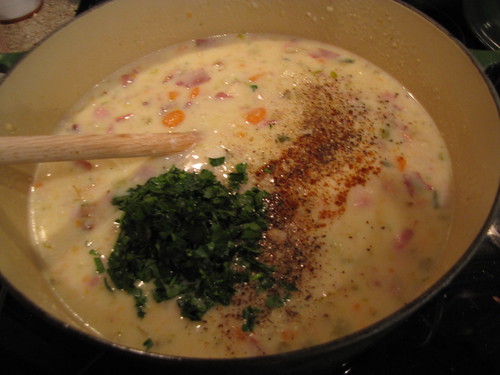 Once you’ve added milk or cream to a soup, it’s better if it does not continue to boil and boil. Keep the soup warm on low heat until you are ready to serve.

Ladle it into bowls and garnish with additional parsley and a bit of shredded cheddar cheese.

I usually use my ham bone for bean soups like Split Pea or Navy Bean so Ham & Potato Soup was a nice change of pace.

Never throw away the ham bone! If you can’t use it right away, put it in a plastic bag in the freezer. Or send it to me…