I decided to call this tasty dish Chicken with Delicious Sherry Sauce because my original title, Chicken with Sherry & Ginger sounded more like a dinner invitation than a recipe.

Maybe we should just call this Delicious Chicken.

This recipe comes from my friend Cody who somehow found a 1959 James Beard recipe for Chicken Saute with Sherry.

Do you know about James Beard? 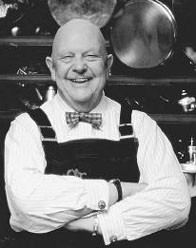 Isn’t he cute? (photo from the internet….I’m not that old)

You could say that they were the original Iron Chefs.

This recipe is a great example of putting a few good ingredients together without much fuss to create a wonderful dish. I took Cody’s suggestion to use chicken thighs since they offer a bit more flavor than white meat. Cody will have a complete spasm about this, but I took the skin off my chicken. Personally, I think the chicken skin is icky and I’m also interested in making this dish a bit healthier. Since most of the fat is in the skin, off it goes. If you’re a fan of skin, by all means, leave your chicken skin on. The steps are exactly the same with or without the chicken skin. Pat the chicken dry with a paper towel and season liberally with salt and pepper. Add the chicken to the pan and brown on all sides. You want only a nice golden color on the chicken so watch and adjust the heat lower if you need to keep the chicken from over-browning.

For the browning stage, you might need to work with the chicken in two batches so that you don’t over crowd the pan.

I made an addition to the recipe by adding a chopped shallot. I love the combination of shallot and sherry and think it adds a lot of flavor to the sauce. Remove the brown peel from a piece of ginger root and cut the ginger into small discs. You’ll need about 6 slices of fresh ginger. Once all of the chicken has browned, remove it from the pan. It’s okay that the chicken is not fully cooked as it will continue to cook in the sherry sauce.

Add the shallot, ginger slices and 3/4 cup of sherry to the pan. Scrape up any brown bits from the bottom of the pan. If you are a less messy cook than me, you don’t have to remove the chicken from the pan. However, I’ve found that it’s easier to make the sauce and stir the pan without having to work around the chicken.

Put the chicken thighs back in the pan, reduce the heat to low, cover with a lid, and simmer for 20 – 30 minutes until the chicken has cooked through. During the cooking time, turn the chicken occasionally to coat both sides in the delicious sauce.

When the chicken is tender and fully cooked, remove it to a warm platter.  Remove the slices of ginger from the pan and discard.

Turn the heat on the pan up to medium high and add the remaining 1/4 cup sherry. Cook the sauce for 2-3 minutes, scraping up any remaining browned bits from the bottom of the pan. Season to taste with salt & pepper.

At this point, I decided that I would like my sauce to be a little thicker so I used an old trick called a Beurre Manie. That’s just a fancy French cooking term for smushed butter and flour.

As you know from making gravy, if you add flour directly to a sauce you get all sorts of lumps. Not good. With this method, you smash up butter and flour together with a fork. Smash them together with a fork until the flour and butter are incorporated into a paste. Now when you add this paste to the sauce, the butter will keep the flour from clumping. The sauce will magically thicken and have a lovely sheen and flavor. Pour the sauce over the chicken and garnish with a bit of parsley if you’re feeling extra fancy.

This dish is simple and delicious. The ginger flavor is very mild and just accompanies the sherry and shallot flavors.
I like to serve this with mashed red skinned potatoes although rice would be good too. Or you might just want some crusty French bread to soak up the sauce.