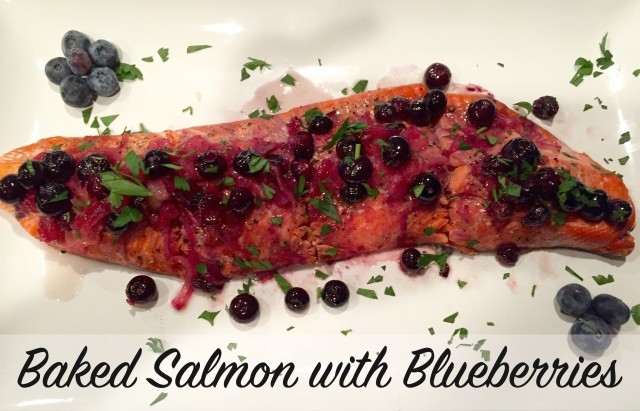 Baked Salmon with Blueberries is a recipe you need to make right now.

Sockeye Salmon is in season. Fresh blueberries are in season. It’s meant to be!

The answer is yes!

On their own, blueberries are not a very sweet fruit. They’re usually put into pies, tarts, and scones that have ample added sugar.

Pair them with more savory and aromatic ingredients like white wine and shallots, and they go perfectly with the season’s freshest salmon.

As a bonus to its funkiness, this is quite an easy and quick recipe to prepare. 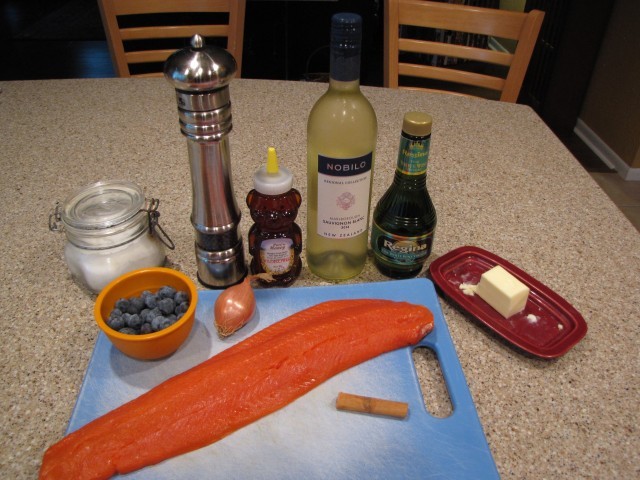 I plan on 6-8 ounces of fish per person and have about 1½ pounds of salmon fillet. (2 servings + a leftover for Jim’s lunch.)

For dishes like this, I prefer to cook the fillet whole so that it doesn’t dry out and then cut it into individual portions when I am ready to serve. 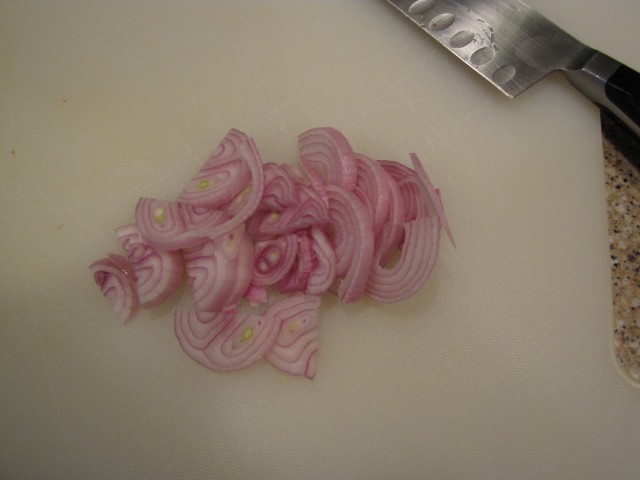 Toss in 1 cinnamon stick and 2-3 sprigs of fresh thyme or a very, very small pinch of dried.

Snails ate almost all my potted herbs while I was in Minnesota so the thyme I thought was growing on my patio was reduced to twigs. Big bummer but I added just a tiny pinch of dried thyme. I’m not a huge fan of making that substitution since I really think the fresh thyme is a totally different flavor, but it worked out just fine. Just don’t go overboard or you’ll get that chicken dinner flavor. 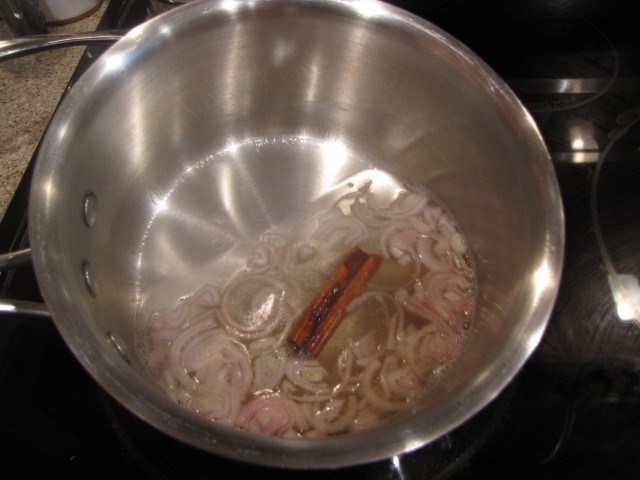 Cook the shallots & wine over medium heat until it simmers and almost all of the liquid evaporates.

You can get the shallots almost to the point of no liquid since the berries will add their juice back into the sauce. 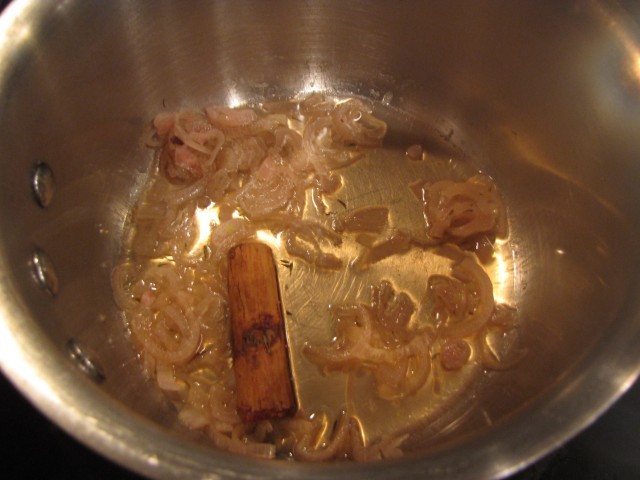 When most of the liquid is gone, add 2 Tablespoons of butter, 1 Tablespoon of honey, and ¾ cup of fresh blueberries to the pot. 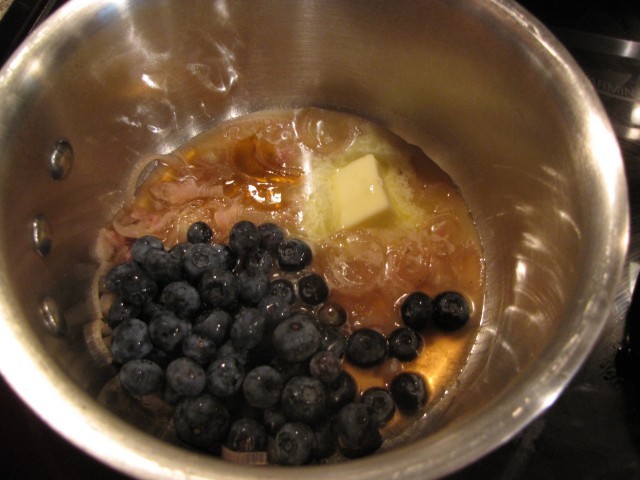 Cook just until the berries soften and the sauce turns pink, about 4 minutes. 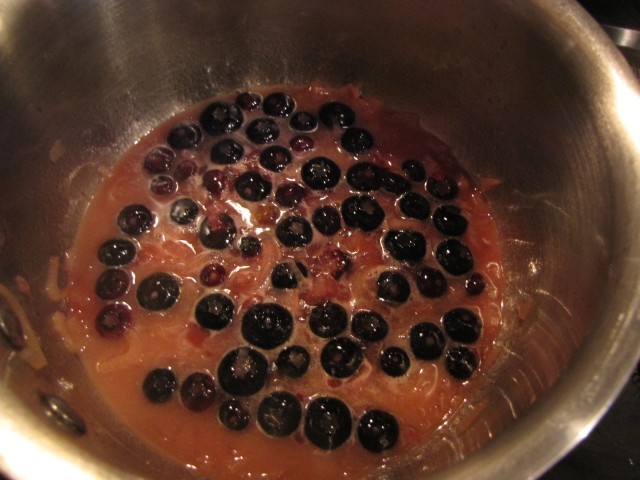 Place the salmon on a large baking sheet that has been covered with foil. Spray or oil the foil so the fish does not stick.

Season the fish lightly with salt & pepper and spoon the berries and pan sauce over the top. Discard the cinnamon stick. 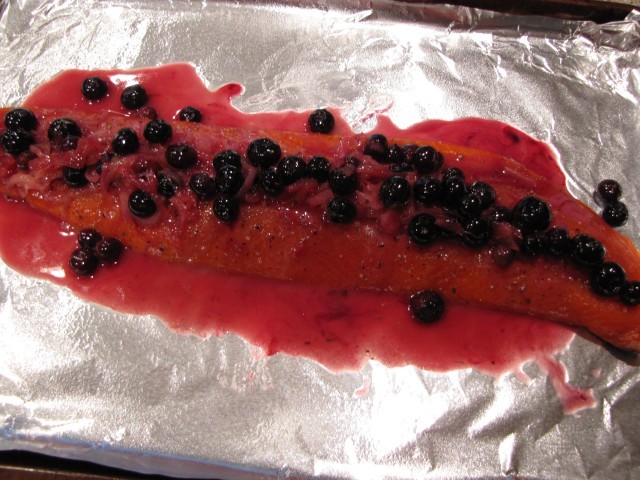 Bake at 400° for 10 minutes or until the fish flakes easily with a fork. 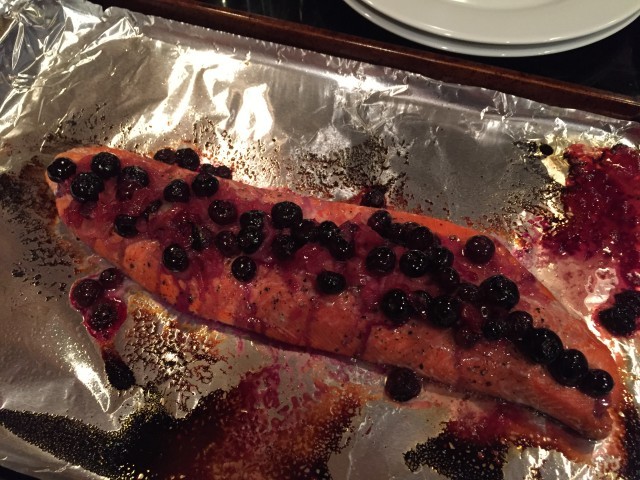 I think salmon is best cooked a little on the medium rare side so that it doesn’t dry out. Look for the middle of the fish to be slightly darker pink than the top and edges.

Allow the fish to rest for a few minutes to set up, cut into individual portions, and serve with the blueberries spooned on top.

If your salmon had skin on it, it’s nice to run a thin spatula between the flesh of the fish and the skin to remove it before you put it on the plate. 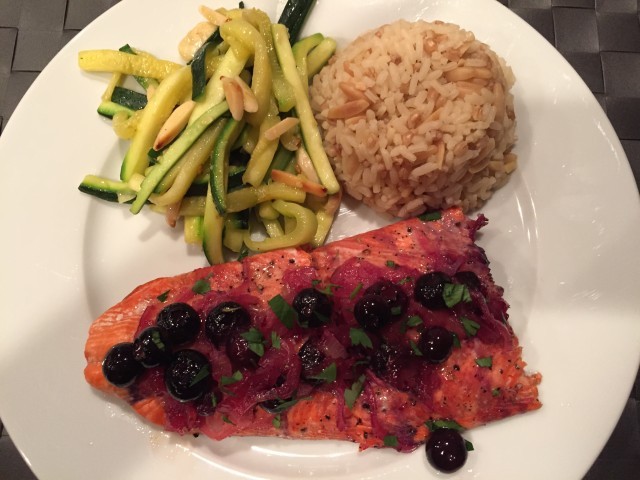 Baked Salmon with Blueberries is light, refreshing, and just a little bit funky.

I loved being able to smash the cooked berries with the back of my fork so that I got both flavors in every bite.

If you’re a fan of fresh salmon, PLEASE give this recipe a try while all the ingredients are at their seasonal best!